The WD40-containing E3 ubiquitin ligase RFWD3 has been recently linked to the repair of DNA damage by homologous recombination (HR). Here we have shown that an RFWD3 mutation within the WD40 domain is connected to the genetic disease Fanconi anemia (FA). An individual presented with congenital abnormalities characteristic of FA. Cells from the patient carrying the compound heterozygous mutations c.205_206dupCC and c.1916T>A in RFWD3 showed increased sensitivity to DNA interstrand cross-linking agents in terms of increased chromosomal breakage, reduced survival, and cell cycle arrest in G2 phase. The cellular phenotype was mirrored in genetically engineered human and avian cells by inactivation of RFWD3 or introduction of the patient-derived missense mutation, and the phenotype was rescued by expression of wild-type RFWD3 protein. HR was disrupted in RFWD3-mutant cells as a result of impaired relocation of mutant RFWD3 to chromatin and defective physical interaction with replication protein A. Rfwd3 knockout mice appear to have increased embryonic lethality, are subfertile, show ovarian and testicular atrophy, and have a reduced lifespan resembling that of other FA mouse models. Although RFWD3 mutations have thus far been detected in a single child with FA, we propose RFWD3 as an FA gene, FANCW, supported by cellular paradigm systems and an animal model. 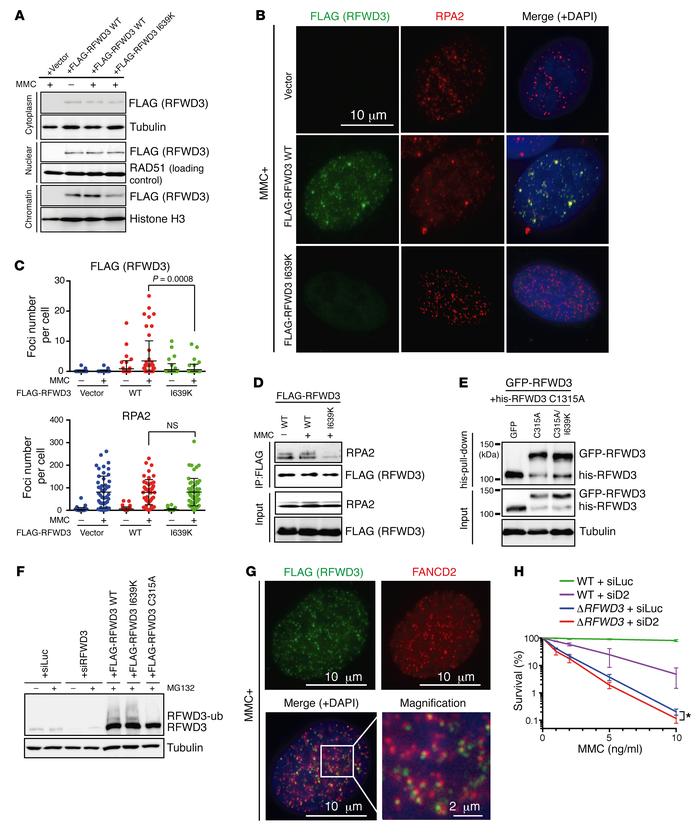 () Cell fractionation shows impaired chromatin relocation of RFWD3 with the mutation in the WD40 domain when U2OS cells were transiently transfected with FLAG-WT-RFWD3 or FLAG-RFWD3-I639K and exposed to MMC as indicated. () FLAG-RFWD3 immunofluorescence analysis of the same cells used in exposed to MMC. Anti-FLAG detected RFWD3, anti-RPA2 detected endogenous RPA, and DAPI counterstains the nucleus. () Number of FLAG-RFWD3 (top graph) and RPA2 (bottom graph) foci per nucleus without or with exposure to MMC. Cells are those used in . More than 50 cells were counted for each sample. The experiment was repeated 4 times. Data represent mean ± SD. values of WT versus I639K were calculated using the unpaired, 2-tailed Student’s test. NS, not significant. () Coimmunoprecipitation of FLAG-WT-RFWD3 or FLAG-RFWD3-I639K with RPA2 in transiently transfected U2OS cells without or with exposure to MMC. () Pull-down study of GFP-RFWD3 and his-RFWD3 dimerization in U2OS cells transiently transfected with GFP, GFP-RFWD3-C315A (RING mutation), or GFP-RFWD3-C315A/I639K (double mutation). Detection was by anti-his and anti-GFP antibodies. () Auto-ubiquitination of FLAG-WT-RFWD3, FLAG-RFWD3-I639K, or FLAG-RFWD3-C315A in transiently transfected U2OS cells without or with exposure to the proteasome inhibitor MG132. siLuc and siRFWD3 served as negative controls. Detection was by anti-RFWD3. () Colocalization of FLAG-RFWD3 and FANCD2. U2OS cells were transiently transfected with FLAG-RFWD3 and exposed to MMC (100 ng/ml for 24 hours). () Survival curves of WT HAP1 and -mutated HAP1 cells transfected with siRNAs to luciferase (Luc) or FANCD2 (D2) and exposed to MMC. Means ± SD of 3 independent experiments are shown. Depletion of FANCD2 and BRCA2 (control) was analyzed by immunoblotting and is shown in . The value (* < 0.05) of Δ+siLuc versus Δ+siD2 was calculated using the Tukey’s range test.