Macrophages are attracted to developing tumors and can participate in immune surveillance to eliminate neoplastic cells. In response, neoplastic cells utilize NF-κB to suppress this killing activity, but the mechanisms underlying their self-protection remain unclear. Here, we report that this dynamic interaction between tumor cells and macrophages is integrally linked by a soluble factor identified as growth and differentiation factor 15 (GDF-15). In vitro, tumor-derived GDF-15 signals in macrophages to suppress their proapoptotic activity by inhibiting TNF and nitric oxide (NO) production. In vivo, depletion of GDF-15 in Ras-driven tumor xenografts and in an orthotopic model of pancreatic cancer delayed tumor development. This delay correlated with increased infiltrating antitumor macrophages. Further, production of GDF-15 is directly regulated by NF-κB, and the colocalization of activated NF-κB and GDF-15 in epithelial ducts of human pancreatic adenocarcinoma supports the importance of this observation. Mechanistically, we found that GDF-15 suppresses macrophage activity by inhibiting TGF-β–activated kinase (TAK1) signaling to NF-κB, thereby blocking synthesis of TNF and NO. Based on these results, we propose that the NF-κB/GDF-15 regulatory axis is important for tumor cells in evading macrophage immune surveillance during the early stages of tumorigenesis. 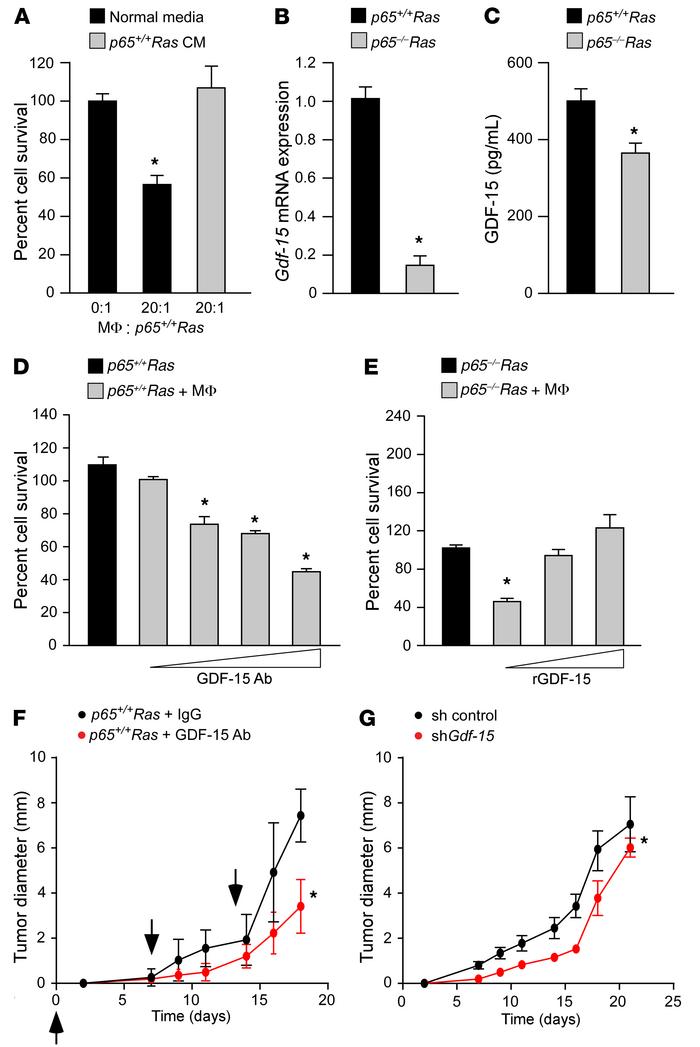