B cells contribute to multiple aspects of autoimmune disorders and may play a role in triggering disease. Thus, targeting B cells may be a promising strategy for treating autoimmune disorders. Better understanding of the B cell subsets that are responsible for the development of autoimmunity will be critical for developing efficient therapies. Here we have reported that B cells expressing the transcription factor T-bet promote the rapid appearance of autoantibodies and germinal centers in spontaneous murine models of systemic lupus erythematosus (SLE). Conditional deletion of T-bet from B cells impaired the formation of germinal centers and mitigated the development of kidney damage and rapid mortality in SLE mice. B cell–specific deletion of T-bet was also associated with lower activation of both B cells and T cells. Taken together, our results suggest that targeting T-bet–expressing B cells may be a potential target for therapy for autoimmune diseases.

B cell–specific T-bet expression is responsible for the development of kidney pathology and rapid mortality in lupus-like autoimmunity. 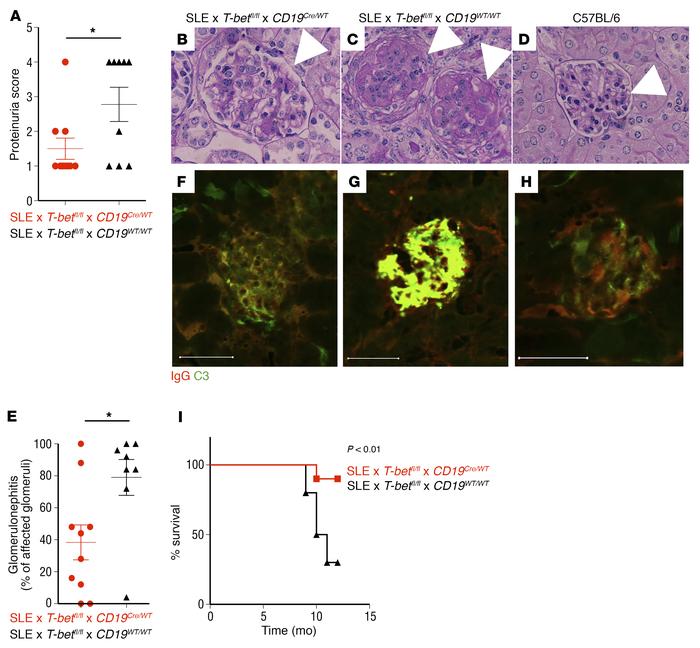 () Proteinuria scores of 7-month-old mice (1 = trace, 2 = 30 mg/dl, 3 = 100 mg/dl, 4 ≥ 500 mg/dl). (–) Kidney sections from 12-month-old mice were stained with periodic acid–Schiff from SLE × × (), and SLE × × (), and C57BL/6 () mice. A representative glomerulus is shown in each section. Arrowheads indicate glomeruli. Hypercellularity and endocapillary proliferation were seen in most glomeruli from the SLE × × mice. Original magnification, ×400. () Twenty-five glomeruli for each mouse were evaluated in a blinded analysis in kidney sections. The percentage of affected glomeruli is shown for each individual mouse. (–) Five kidneys of 12-month-old mice per genotype were analyzed by immunofluorescence histology (IFH). Representative IFH staining of kidney glomeruli stained with anti-IgG (red) and anti-C3 (green) is shown for: SLE × × (), SLE × × (), and C57BL/6 () mice. Scale bars: 50 μm. () Survival of SLE × × , and SLE × × littermate control mice was followed over the same 12 months ( = 10 mice per group). Comparison of the survival curves and statistical analysis were performed using Prism software. * < 0.05. Significance determined by Student’s test ( and ) or Gehan-Berslow-Wilcoxon test ().