Microglia and C9orf72 in neuroinflammation and ALS and frontotemporal dementia

Microglia and C9orf72 in neuroinflammation and ALS and frontotemporal dementia

Amyotrophic lateral sclerosis (ALS) is a degenerative disorder that is characterized by loss of motor neurons and shows clinical, pathological, and genetic overlap with frontotemporal dementia (FTD). Activated microglia are a universal feature of ALS/FTD pathology; however, their role in disease pathogenesis remains incompletely understood. The recent discovery that ORF 72 on chromosome 9 (C9orf72), the gene most commonly mutated in ALS/FTD, has an important role in myeloid cells opened the possibility that altered microglial function plays an active role in disease. This Review highlights the contribution of microglia to ALS/FTD pathogenesis, discusses the connection between autoimmunity and ALS/FTD, and explores the possibility that C9orf72 and other ALS/FTD genes may have a “dual effect” on both neuronal and myeloid cell function that could explain a shared propensity for altered systemic immunity and neurodegeneration.

Schematic of the gene. 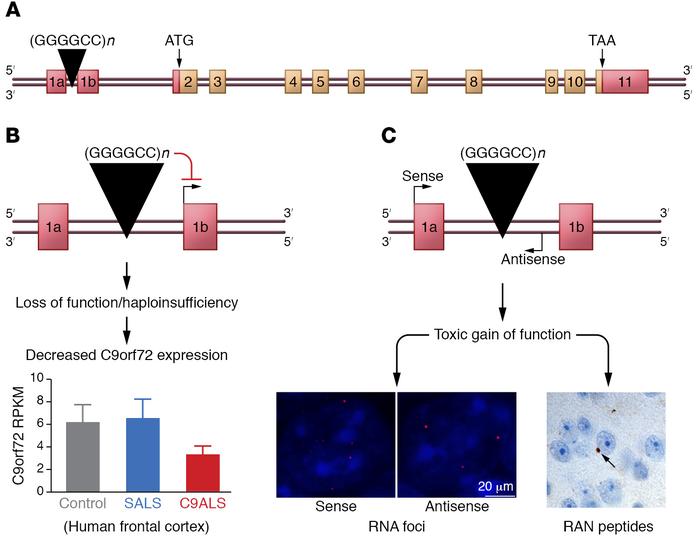 The location of the intronic hexanucleotide (GGGGCC) repeat expansion (black triangles) is shown between the noncoding exons 1a and 1b, upstream of the start codon. () Expansion of the hexanucleotide repeat from the normal range (about 2–30) to very large sizes (typically about 100–1,000) is the most common genetic cause of ALS/FTD. Bars represent coding (yellow) and noncoding (red) regions, and the positions of the start codon (ATG) and stop codon (TAA) are indicated. () Large GGGGCC expansions cause downregulation of gene expression, supporting that loss of normal C9orf72 function may contribute to disease. SALS, sporadic ALS; C9ALS, C9-associated ALS. RPKM, reads per kilobase per million. () Both sense and antisense transcripts containing expansions form RNA foci in cell nuclei, which may have a toxic effect on nuclear protein function. Repeat-containing transcripts can also serve as templates for RAN translation to generate simple dipeptide repeat proteins (RAN peptides) that accumulate in the brains of carriers and may contribute to disease through a variety of toxic mechanisms. C9orf72 expression data are based on data from Prudencio et al. (). Sense and antisense foci and RAN dipeptide pictures are reproduced with permission from ().