Long-acting anti-HIV products can substantively change the standard of care for patients with HIV/AIDS. To this end, hydrophobic antiretroviral drugs (ARVs) were recently developed for parenteral administration at monthly or longer intervals. While shorter-acting hydrophilic drugs can be made into nanocarrier-encased prodrugs, the nanocarrier encasement must be boosted to establish long-acting ARV depots. The mixed-lineage kinase 3 (MLK-3) inhibitor URMC-099 provides this function by affecting autophagy. Here, we have shown that URMC-099 facilitates ARV sequestration and its antiretroviral responses by promoting the nuclear translocation of the transcription factor EB (TFEB). In monocyte-derived macrophages, URMC-099 induction of autophagy led to retention of nanoparticles containing the antiretroviral protease inhibitor atazanavir. These nanoparticles were localized within macrophage autophagosomes, leading to a 4-fold enhancement of mitochondrial and cell vitality. In rodents, URMC-099 activation of autophagy led to 50-fold increases in the plasma drug concentration of the viral integrase inhibitor dolutegravir. These data paralleled URMC-099–mediated induction of autophagy and the previously reported antiretroviral responses in HIV-1–infected humanized mice. We conclude that pharmacologic induction of autophagy provides a means to extend the action of a long-acting, slow, effective release of antiretroviral therapy. 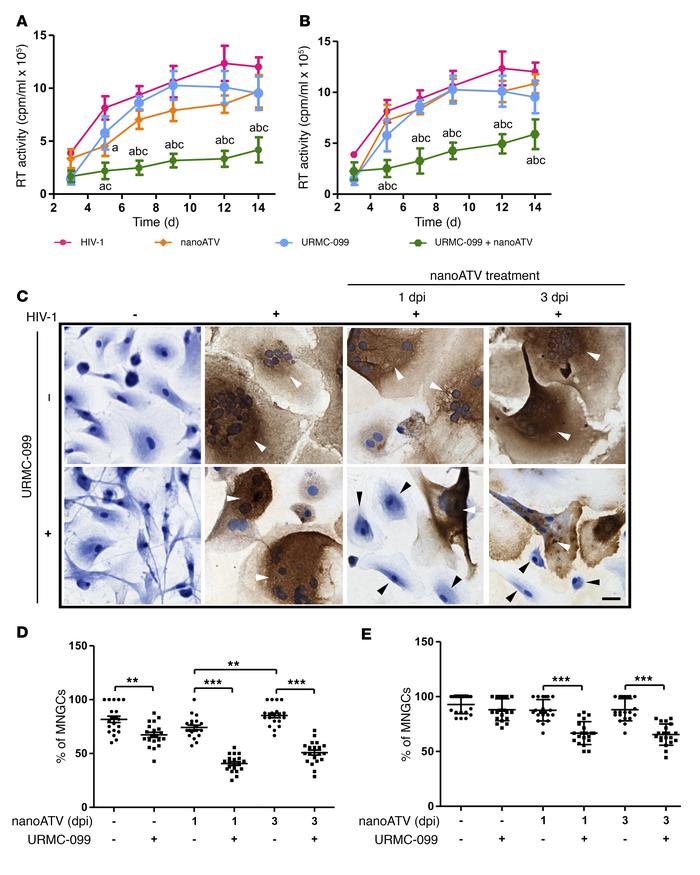 HIV-1ADA–infected human MDMs were treated with 1 μM nanoATV on () day 1 or () day 3 after infection in the presence or absence of 400 ng/ml URMC-099. Supernatants were collected on different days after infection to measure HIV-1 RT activity. Values represent the mean ± SD ( = 5). The same HIV control plot is presented in and . For a better comparison, see the HIV control plot in , and in . The mean was compared by 2-way ANOVA, which showed a time-dependent effect ( < 0.0001). Pairwise comparisons were performed with Bonferroni’s post-hoc test for < 0.05 compared with acontrol, bNanoATV, and cURMC-099. () On day 7 after infection, the cells were fixed and stained for HIV-1 p24 antigen and counterstained with hematoxylin. Multi- and mononucleated cells are marked with white and black arrowheads, respectively. Scale bar: 20 μm. On () day 7 and () day 14 after infection, the percentage of MNGCs was quantified from the total number of cells in 20 different fields. Values represent the mean ± SD. ** ≤ 0.01 and *** ≤ 0.001, by Student’s test. Multiple comparisons were corrected for the FDR by the Benjamini-Hochberg method, and data are representative of 3 independent experiments. dpi, days post infection.