Alloimmune T cell responses induce graft-versus-host disease (GVHD), a serious complication of allogeneic bone marrow transplantation (allo-BMT). Although Notch signaling mediated by Delta-like 1/4 (DLL1/4) Notch ligands has emerged as a major regulator of GVHD pathogenesis, little is known about the timing of essential Notch signals and the cellular source of Notch ligands after allo-BMT. Here, we have shown that critical DLL1/4-mediated Notch signals are delivered to donor T cells during a short 48-hour window after transplantation in a mouse allo-BMT model. Stromal, but not hematopoietic, cells were the essential source of Notch ligands during in vivo priming of alloreactive T cells. GVHD could be prevented by selective inactivation of and in subsets of fibroblastic stromal cells that were derived from chemokine -expressing host cells, including fibroblastic reticular cells and follicular dendritic cells. However, neither T cell recruitment into secondary lymphoid organs nor initial T cell activation was affected by loss. Thus, we have uncovered a pathogenic function for fibroblastic stromal cells in alloimmune reactivity that can be dissociated from their homeostatic functions. Our results reveal what we believe to be a previously unrecognized Notch-mediated immunopathogenic role for stromal cell niches in secondary lymphoid organs after allo-BMT and define a framework of early cellular and molecular interactions that regulate T cell alloimmunity.

An early pulse of Notch signaling is critical to drive pathogenic T cell alloreactivity after BMT. 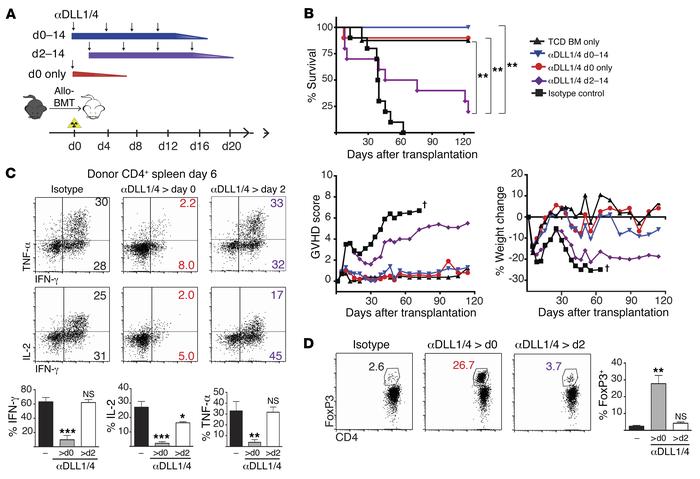