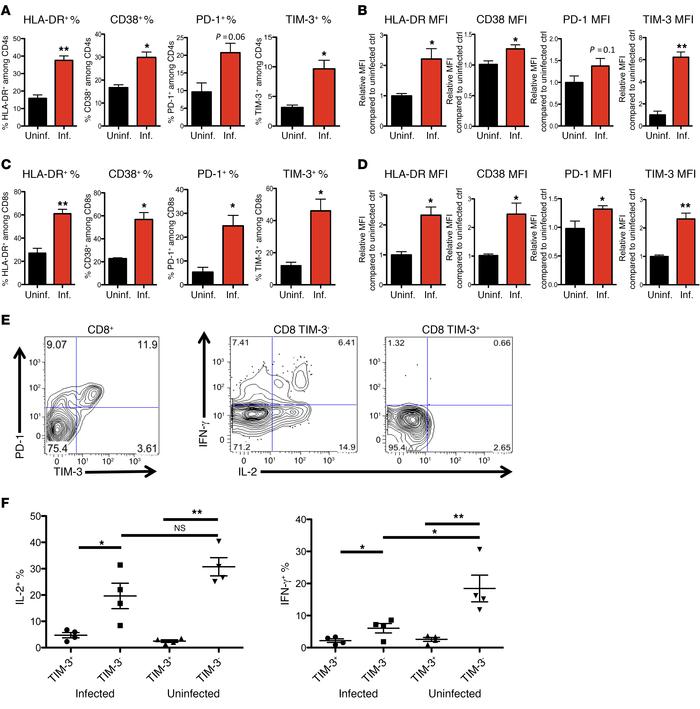 NSG-BLT humanized mice were constructed by implantation of fetal liver and fetal thymus as well as hematopoietic stem cells into the NSG mice. After human immune reconstitution, mice were mock-infected or infected with HIVNL4-3. Thirteen weeks after infection, whole blood from each mouse was collected, and cells were stained with anti-human antibodies CD45, CD3, CD4, CD8, TIM-3, PD-1, and HLA-DR and analyzed by flow cytometry. (–) Expression of HLA-DR, CD38, PD-1, and TIM-3 on human CD4 ( and ) and CD8 cells ( and ) was accessed by gating and by measurement of the percentage positive ( and ) and relative MFI ( and ) of marker expression ( = 3–5 mice per group and more than 1,000 events were acquired for each flow analysis). For relative MFI, data displayed are the mean relative MFI ± SEM of these markers as compared with the mean MFI of uninfected controls, showing differences between these populations. () Splenocytes from HIV-infected NSG mice were stimulated with mitogen for 6 hours with GolgiPlug and were stained for expression of CD8, TIM-3, PD-1, and intracellular expression of IL-2 and IFN-γ. More than 1,000 events were acquired for each flow analysis, and the experiment was repeated more than 3 times. () Summary and statistical analysis of the intracellular cytokine expression assay in ( = 4–6 mice per group). The Mann-Whitney test was used to compare 2 groups (* < 0.05, ** < 0.005) (–), and the Kruskal-Wallis test was used for multiple comparisons (, < 0.05). Data represent mean ± SEM.