Cholestatic liver fibrosis is caused by obstruction of the biliary tract and is associated with early activation of portal fibroblasts (PFs) that express Thy-1, fibulin 2, and the recently identified marker mesothelin (MSLN). Here, we have demonstrated that activated PFs (aPFs) and myofibroblasts play a critical role in the pathogenesis of liver fibrosis induced by bile duct ligation (BDL). Conditional ablation of MSLN+ aPFs in BDL-injured mice attenuated liver fibrosis by approximately 50%. Similar results were observed in MSLN-deficient mice ( mice) or mice deficient in the MSLN ligand mucin 16 ( mice). In vitro analysis revealed that MSLN regulates TGF-β1–inducible activation of WT PFs by disrupting the formation of an inhibitory Thy-1–TGFβRI complex. MSLN also facilitated the FGF-mediated proliferation of WT aPFs. Therapeutic administration of anti-MSLN–blocking Abs attenuated BDL-induced fibrosis in WT mice. Liver specimens from patients with cholestatic liver fibrosis had increased numbers of MSLN+ aPFs/myofibroblasts, suggesting that MSLN may be a potential target for antifibrotic therapy. 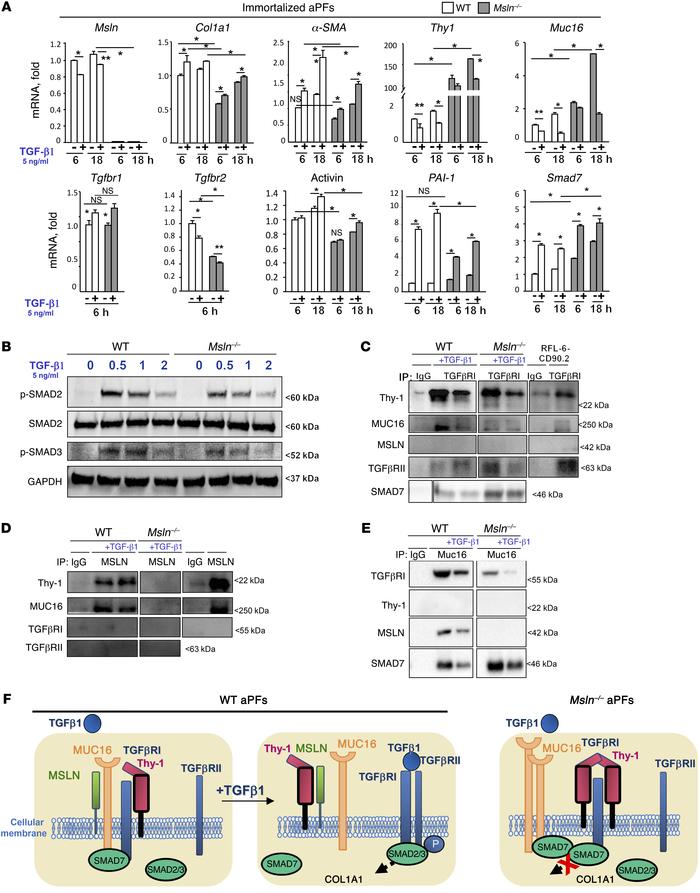 () Responses to TGF-β1 were compared in immortalized WT and aPFs using qPCR. values were determined by ANOVA, ** < 0.01 and * < 0.05. () TGF-β1–induced phosphorylation of SMAD2/3 was compared in WT and aPFs using Western blotting (representative blots are shown). (–) IPs of cell lysates from WT or aPFs, with or without TGF-β1, and of lysates of RFL-6-CD90.2 (lung fibroblast cell line) and LMP (pancreatic cancer cell line), which were used as controls for the expression of Thy-1 and MSLN, respectively, with () anti-TGFβRI Ab, () anti-MSLN Ab, and () anti-MUC16 Ab. Immunoblots are representative of more than 3 independent IPs (see also ). () Proposed model of MSLN regulation of TGF-β1 signaling. In WT aPFs, Thy-1, and MUC16 interact with TGFβRI under steady-state conditions, and MUC16 and Thy-1 bind to MSLN (but not to each other). In TGF-β1–stimulated WT aPFs, both Thy-1 and MUC16 dissociate from the TGFβRI complex, and MSLN–Thy-1 interaction is increased, while MSLN-MUC16 interaction is decreased, suggesting that binding of MSLN to Thy-1 enables TGF-β1 signaling. Deletion of results in overexpression of Thy-1, MUC16, and SMAD7 in aPFs, increased formation of the inhibitory Thy-1–TGFβRI complex, and retention of SMAD7 at the C-terminus of MUC16 TGFβRI receptors.