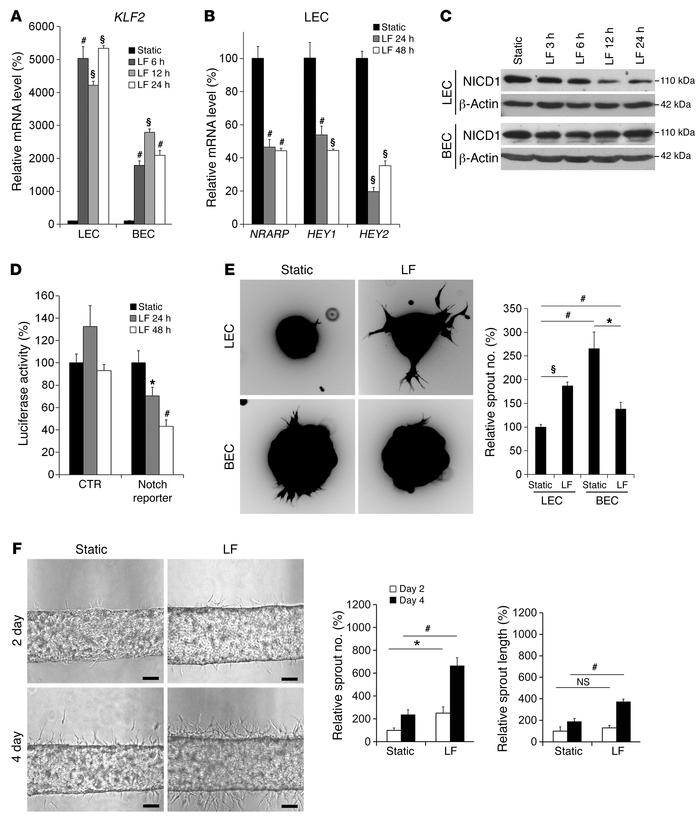 ( and ) Real-time quantitative reverse transcription PCR (qRT-PCR) data showing the mRNA levels of in LECs and BECs () and those of Notch target genes in LECs () in response to steady laminar flow (2 dyn/cm2). Expression of the Notch target genes in BECs by laminar flow is shown in . () Protein levels of NICD1 in LECs and BECs in response to laminar flow (2 dyn/cm2). The intensity of the Western blotting bands is quantitated in . A monoclonal anti-NOTCH1 antibody that specifically detects the cleaved form of NOTCH1 at Val1744 was used. Blots presented are derived from replicate samples run on parallel gels. () Luciferase assay showing the flow-mediated suppression of Notch activity in LECs. LECs were transfected with a Notch activity reporter (pGa981-6) () and exposed to laminar flow (2 dyn/cm2) for 24 or 48 hours before measurement of luciferase activity. () Spheroid-based sprouting assays. Cells were exposed or not exposed to laminar flow (2 dyn/cm2) for 24 hours, stained with a CellTracker dye, aggregated in methylcellulose polymers, and then embedded in Matrigel. After 24 hours, images of more than 20 spheroids were taken for analyses, and relative sprout numbers were quantified in the graph. () Biomimetic sprouting assay. Intraluminal laminar flow (5 dyn/cm2) was applied onto a layer of LECs lining the inner wall of the vascular mimetic channels made in collagen gel. Scale bars: 100 μm. Relative sprout length and number were graphed. Each experiment was independently performed at least 3 times with consistent results. Data are expressed as SEM and SD from 1 representative data set. * < 0.05; # < 0.01; § < 0.001; test.