The clinical utility of inhibiting cytochrome P450 17A1 (CYP17), a cytochrome p450 enzyme that is required for the production of androgens, has been exemplified by the approval of abiraterone for the treatment of castration-resistant prostate cancer (CRPC). Recently, however, it has been reported that CYP17 inhibitors can interact directly with the androgen receptor (AR). A phase I study recently reported that seviteronel, a CYP17 lyase–selective inhibitor, ædemonstrated a sustained reduction in prostate-specific antigen in a patient with CRPC, and another study showed seviteronel’s direct effects on AR function. This suggested that seviteronel may have therapeutically relevant activities in addition to its ability to inhibit androgen production. Here, we have demonstrated that CYP17 inhibitors, with the exception of orteronel, can function as competitive AR antagonists. Conformational profiling revealed that the CYP17 inhibitor–bound AR adopted a conformation that resembled the unliganded AR (apo-AR), precluding nuclear localization and DNA binding. Further, we observed that seviteronel and abiraterone inhibited the growth of tumor xenografts expressing the clinically relevant mutation AR-F876L and that this activity could be attributed entirely to competitive AR antagonism. The results of this study suggest that the ability of CYP17 inhibitors to directly antagonize the AR may contribute to their clinical efficacy in CRPC. 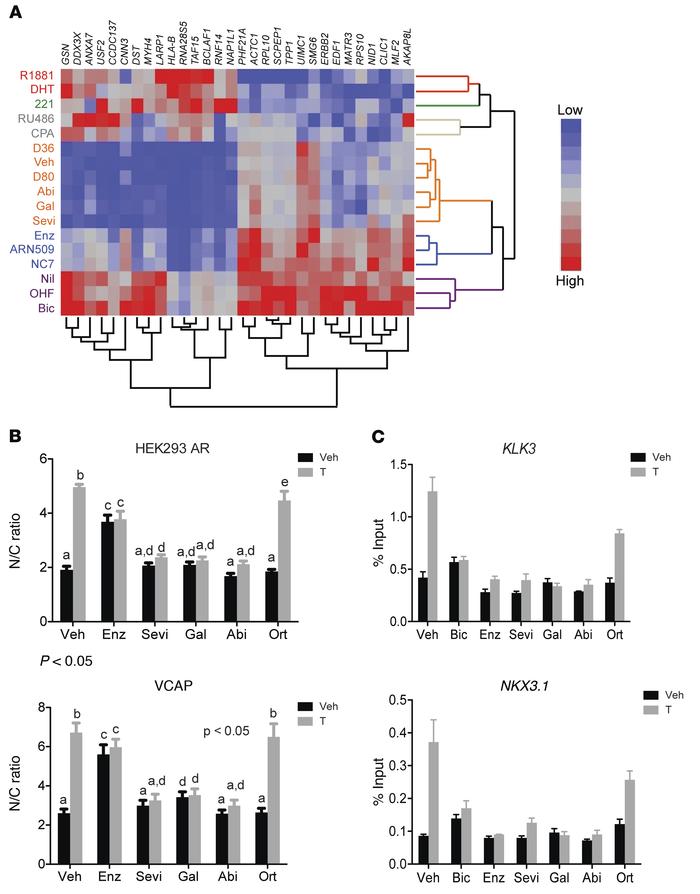 () CYP17 inhibitors induced novel AR conformation. Mammalian 2-hybrid–based AR coregulator–profiling assays were performed using HepG2 cells transfected with VP16-AR, 5XGalLuc3, Gal4-coregulator interactor, and -Luc. Cells were induced with the indicated ligand, and dual-luciferase assays were performed. Data were standardized to avoid bias due to signal strength and clustered with the Ward hierarchical clustering method using JMP. DHT, dihydrotestosterone; CPA, cyproterone acetate; Nil, nilutamide. () CYP17 inhibitors blocked androgen-mediated AR nuclear accumulation. HEK293 (transfected with the WT-AR) and VCAP cells were treated with vehicle or 0.3 nM testosterone plus 10 μM of the indicated antagonist for 4 hours. Cells were stained for the AR, DAPI, and phalloidin, and nuclear/cytoplasmic (N/C) ratios were quantified using high-content imaging (ArrayScan). Error bars represent the SEM from 7 to 9 independent experiments. Letters indicate statistically similar groups ( < 0.05) as determined by 1-way ANOVA analysis followed by Bonferroni’s multiple comparisons test. () CYP17 inhibitors blocked association of the AR with DNA. LNCaP cells were treated with the indicated ligand (10 μM) for 4 hours in the presence of vehicle or 1.0 nM testosterone, and ChIP assays were performed with an AR antibody. enhancer occupancy was determined by qPCR analysis and calculated as the percentage of input. Error bars indicate the SD of triplicate qPCR samples from a representative experiment performed in triplicate.