Cerebral malaria is characterized by cytoadhesion of –infected red blood cells (-iRBCs) to endothelial cells in the brain, disruption of the blood-brain barrier, and cerebral microhemorrhages. No available antimalarial drugs specifically target the endothelial disruptions underlying this complication, which is responsible for the majority of malaria-associated deaths. Here, we have demonstrated that ruptured -iRBCs induce activation of β-catenin, leading to disruption of inter–endothelial cell junctions in human brain microvascular endothelial cells (HBMECs). Inhibition of β-catenin–induced TCF/LEF transcription in the nucleus of HBMECs prevented the disruption of endothelial junctions, confirming that β-catenin is a key mediator of . adverse effects on endothelial integrity. Blockade of the angiotensin II type 1 receptor (AT1) or stimulation of the type 2 receptor (AT2) abrogated -iRBC–induced activation of β-catenin and prevented the disruption of HBMEC monolayers. In a mouse model of cerebral malaria, modulation of angiotensin II receptors produced similar effects, leading to protection against cerebral malaria, reduced cerebral hemorrhages, and increased survival. In contrast, AT2-deficient mice were more susceptible to cerebral malaria. The interrelation of the β-catenin and the angiotensin II signaling pathways opens immediate host-targeted therapeutic possibilities for cerebral malaria and other diseases in which brain endothelial integrity is compromised.

Rupture of schizonts, but not cytoadhesion, is required to induce the HBMEC monolayer disruption and migration of β-catenin. 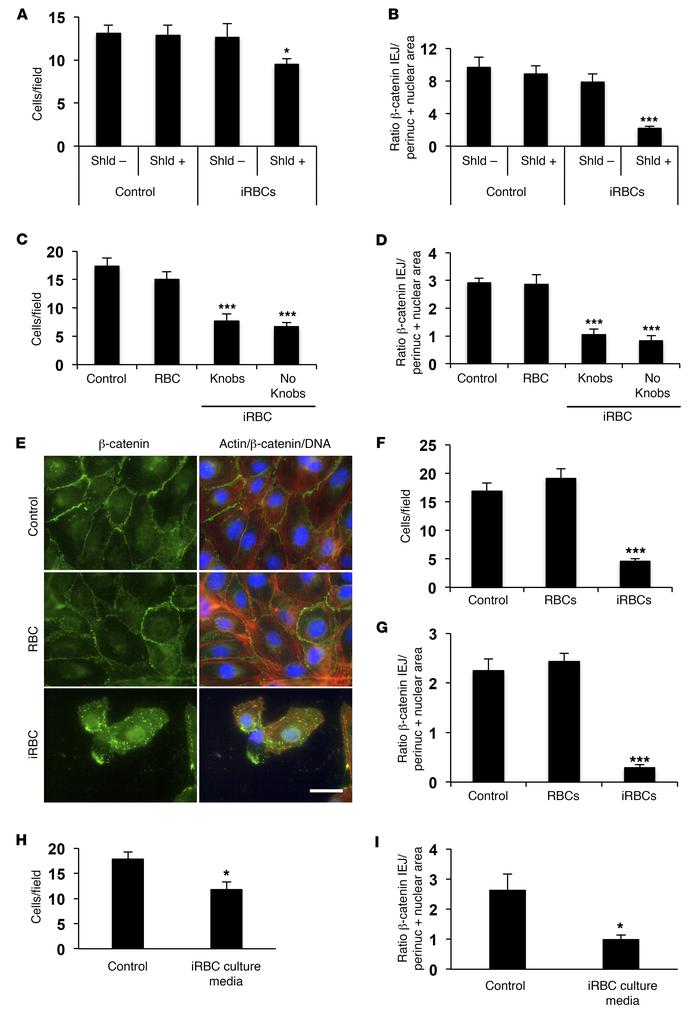 ( and ) Monolayers of HBMECs were incubated without parasites (Control) or with D10-PfCDPK5-DDTM . schizonts (1:40) in the absence (–) or presence (+) of Shield-1 (Shld). The presence of Shield-1 allows conditionally CDPK5-deficient arrested schizonts to rupture (). ( and ) HBMECs were incubated alone, with uninfected RBCs, or with IT4var19 . schizonts (1:40) with or without knobs. (–) HBMECs were incubated alone, with uninfected RBCs, or with 3D7 . schizonts (1:40) under flow conditions (ζ = 1 dyn/cm2). HBMEC immunostaining for β-catenin (green), actin (red), and nuclei (blue) is shown in panel . Scale bar: 30 μm. ( and ) HBMECs were incubated alone or with the culture media of ruptured iRBCs. Results are expressed as average number of HBMECs per microscopic field ( = 10) in , , , and , and as the quantification of β-catenin fluorescence intensity in the perinuclear and nuclear areas versus IEJs for each cell in 10 microscopic fields in , , , and . Results are representative of at least 3 independent experiments. Error bars represent ±SEM. * < 0.05, *** < 0.001 compared with control. Parametric 2-tailed Student’s test ( and ) or 1-way ANOVA and Tukey post hoc analysis were applied (–, , and ).