Administration of conventional antithrombotic treatment (low-dose aspirin plus low–molecular weight heparin [LDA+LMWH]) for obstetric antiphospholipid syndrome (APS) does not prevent life-threatening placenta insufficiency–associated complications such as preeclampsia (PE) and intrauterine growth restriction (IUGR) in 20% of patients. Statins have been linked to improved pregnancy outcomes in mouse models of PE and APS, possibly due to their protective effects on endothelium. Here, we investigated the use of pravastatin in LDA+LMWH-refractory APS in patients at an increased risk of adverse pregnancy outcomes.

We studied 21 pregnant women with APS who developed PE and/or IUGR during treatment with LDA+LMWH. A control group of 10 patients received only LDA+LMWH. Eleven patients received pravastatin (20 mg/d) in addition to LDA+LMWH at the onset of PE and/or IUGR. Uteroplacental blood hemodynamics, progression of PE features (hypertension and proteinuria), and fetal/neonatal outcomes were evaluated.

In the control group, all deliveries occurred preterm and only 6 of 11 neonates survived. Of the 6 surviving neonates, 3 showed abnormal development. Patients who received both pravastatin and LDA+LMWH exhibited increased placental blood flow and improvements in PE features. These beneficial effects were observed as early as 10 days after pravastatin treatment onset. Pravastatin treatment combined with LDA+LMWH was also associated with live births that occurred close to full term in all patients.

The present study suggests that pravastatin may improve pregnancy outcomes in women with refractory obstetric APS when taken at the onset of PE or IUGR until the end of pregnancy.

Mean uterine artery PI versus gestational age in the general population (estimated 5th, 50th, and 95th percentiles are shown) and in the 11 patients with APS (11–21) who were treated with LMWH+LDA supplemented with pravastatin. 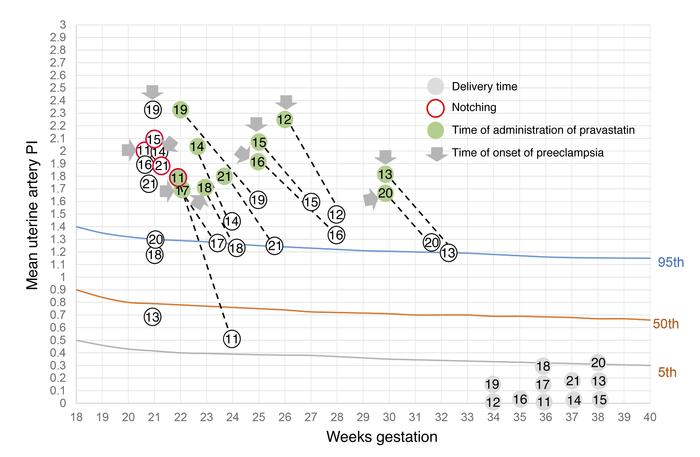 PI values in women with obstetric APS were over the 95th percentile. After pravastatin treatment (gray arrows), PI values decreased. Time of administration of pravastatin is indicated in green. Red circles indicate patients who presented notching in the uterine arteries.