Increased sodium influx via incomplete inactivation of the major cardiac sodium channel NaV1.5 is correlated with an increased incidence of atrial fibrillation (AF) in humans. Here, we sought to determine whether increased sodium entry is sufficient to cause the structural and electrophysiological perturbations that are required to initiate and sustain AF. We used mice expressing a human NaV1.5 variant with a mutation in the anesthetic-binding site (F1759A-NaV1.5) and demonstrated that incomplete Na+ channel inactivation is sufficient to drive structural alterations, including atrial and ventricular enlargement, myofibril disarray, fibrosis and mitochondrial injury, and electrophysiological dysfunctions that together lead to spontaneous and prolonged episodes of AF in these mice. Using this model, we determined that the increase in a persistent sodium current causes heterogeneously prolonged action potential duration and rotors, as well as wave and wavelets in the atria, and thereby mimics mechanistic theories that have been proposed for AF in humans. Acute inhibition of the sodium-calcium exchanger, which targets the downstream effects of enhanced sodium entry, markedly reduced the burden of AF and ventricular arrhythmias in this model, suggesting a potential therapeutic approach for AF. Together, our results indicate that these mice will be important for assessing the cellular mechanisms and potential effectiveness of antiarrhythmic therapies. 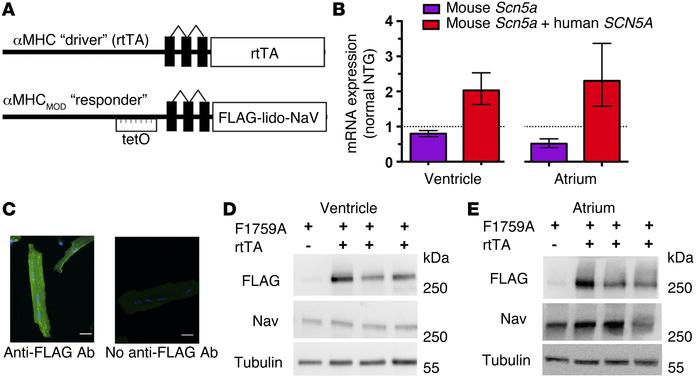 () Schematic of the binary transgene system. αMHC-rtTA is the standard cardiac-specific, reverse tetracycline–controlled transactivator system. The αMHCMOD construct is a modified αMHC promoter containing the tet-operon (tet-O) for regulated expression of FLAG-tagged, lidocaine-resistant NaV1.5 (FLAG-lido-NaV). () Quantification of mouse and human transcripts in ventricle and atrium of F1759A-dTG mice using qPCR. Results are presented as fold difference for each gene against actin by use of 2–ΔΔCT method, followed by normalization to expression of either mouse or mouse and human determined in NTG mice. = 3 NTG and = 4 F1759A-dTG mice in each group. () Immunostaining of F1759A-dTG mice cardiomyocytes with or without anti-FLAG antibody and FITC-conjugated secondary antibody. Images were obtained with confocal at ×40 magnification. ( and ) Anti-FLAG, anti-NaV1.5, and anti-tubulin antibody immunoblots of cardiac homogenates showing FLAG epitope–tagged NaV1.5 expression in ventricle () and atrium () of single TG and dTG mice in the absence of doxycycline-impregnated food.