Regulation of STAT3 activation is critical for normal and malignant hematopoietic cell proliferation. Here, we have reported that the endogenous transmembrane protein upstream-of-mTORC2 (UT2) negatively regulates activation of STAT3. Specifically, we determined that UT2 interacts directly with GP130 and inhibits phosphorylation of STAT3 on tyrosine 705 (STAT3Y705). This reduces cytokine signaling including IL6 that is implicated in multiple myeloma and other hematopoietic malignancies. Modulation of UT2 resulted in inverse effects on animal survival in myeloma models. Samples from multiple myeloma patients also revealed a decreased copy number of and decreased expression of in genomic and transcriptomic analyses, respectively. Together, these studies identify a transmembrane protein that functions to negatively regulate cytokine signaling through GP130 and pSTAT3Y705 and is molecularly and mechanistically distinct from the suppressors of cytokine signaling (SOCS) family of genes. Moreover, this work provides evidence that perturbations of this activation-dampening molecule participate in hematologic malignancies and may serve as a key determinant of multiple myeloma pathophysiology. UT2 is a negative regulator shared across STAT3 and mTORC2 signaling cascades, functioning as a tumor suppressor in hematologic malignancies driven by those pathways. 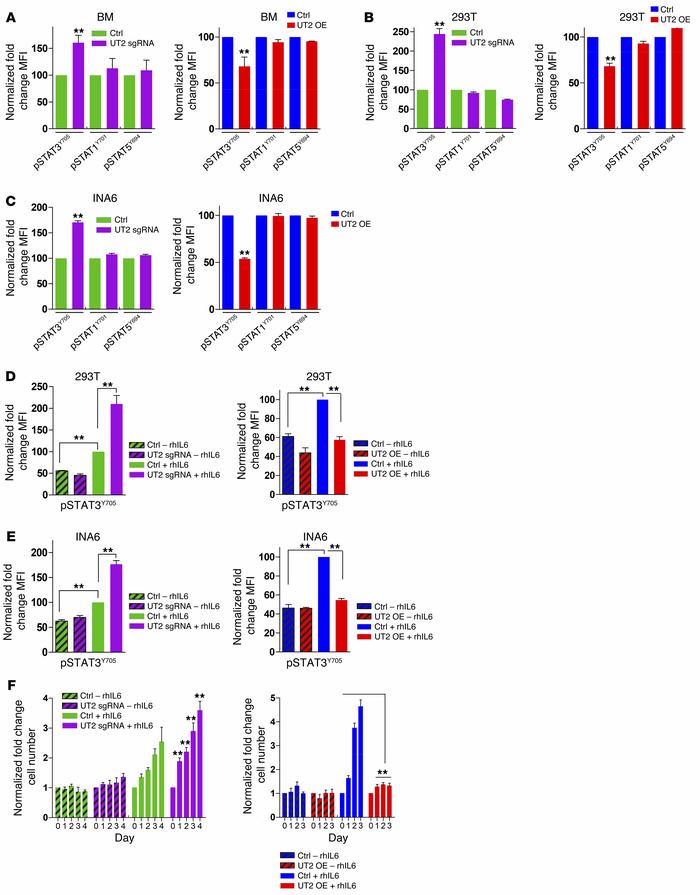