CCR7-mediated interactions of DCs with lymphatic collecting vessels outside of LNs. 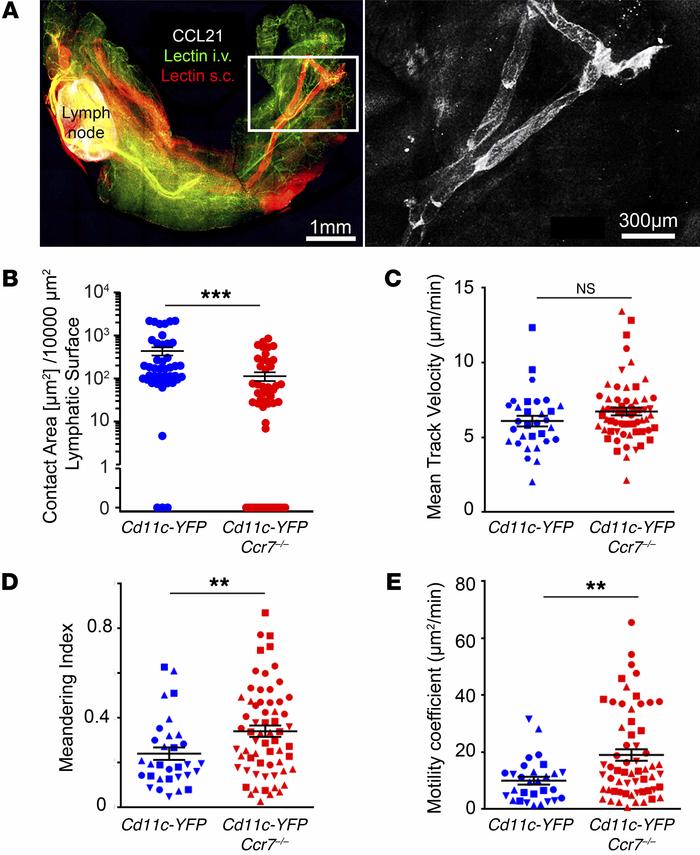 () Whole-mount preparation of brachial adipose tissue containing the brachial LNs with CCL21 staining shown in white. DyLight 594–conjugated lectin (red) was injected s.c. to visualize the draining lymphatic vasculature, and DyLight 488–conjugated lectin was i.v. administered in order to map the blood vasculature. White inset is placed around the major lymphatic collecting vessel afferent to the brachial LNs and shown at greater magnification on the right. () Contact area between DCs and lymphatic collecting vessels in and mice was quantified from single videos prepared during 2-photon intravital imaging, as described in Methods (see also ). Each data point represents analysis of 1 Z-stack, with 5 to 7 Z-stacks examined per mouse. Other measurements assessed from these videos were mean DC velocity (), meandering index (), and motility coefficient (). From 4 to 5 mice per genotype were examined, with multiple areas along the lymphatic collecting vessel analyzed per mouse. For –, each data point represents tracking from an individual cell, with 7 to 10 cells tracked from 4 to 5 mice per genotype. In –, each mouse is plotted using a distinct symbol shape. Mann-Whitney tests were performed for assessment of statistical significance. ** < 0.01; *** < 0.001.