Macrophages have long been considered to contribute to HIV infection of the CNS; however, a recent study has contradicted this early work and suggests that myeloid cells are not an in vivo source of virus production. Here, we addressed the role of macrophages in HIV infection by first analyzing monocytes isolated from viremic patients and patients undergoing antiretroviral treatment. We were unable to find viral DNA or viral outgrowth in monocytes isolated from peripheral blood. To determine whether tissue macrophages are productively infected, we used 3 different but complementary humanized mouse models. Two of these models (bone marrow/liver/thymus [BLT] mice and T cell–only mice [ToM]) have been previously described, and the third model was generated by reconstituting immunodeficient mice with human CD34+ hematopoietic stem cells that were devoid of human T cells (myeloid-only mice [MoM]) to specifically evaluate HIV replication in this population. Using MoM, we demonstrated that macrophages can sustain HIV replication in the absence of T cells; HIV-infected macrophages are distributed in various tissues including the brain; replication-competent virus can be rescued ex vivo from infected macrophages; and infected macrophages can establish de novo infection. Together, these results demonstrate that macrophages represent a genuine target for HIV infection in vivo that can sustain and transmit infection.

Systemic replication of HIV-1 in the tissues of MoM. 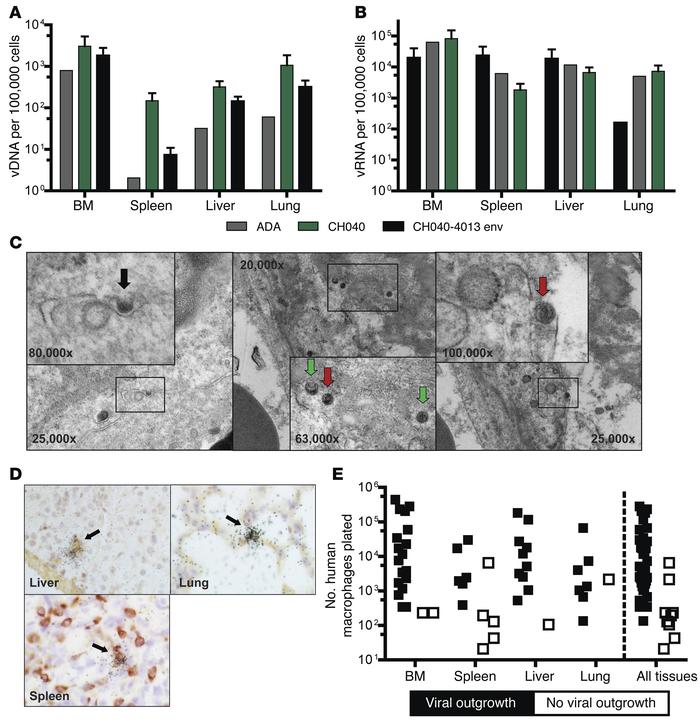 () Cell-associated vDNA copies per 100,000 total cells and () cell-associated vRNA copies per 100,000 total cells were measured from cells isolated from bone marrow (BM), spleen, liver, and lung of MoM infected with ADA ( = 2), CH040 ( = 10), or CH040-4013 env ( = 9). () Electron micrograph of infected MoM bone marrow shows the presence of viral budding (black arrows) as well as free virions (green and red arrows) in the tissue. Virions in which the viral core was visible are denoted with red arrows. Original magnification, ×20,000 to ×100,000, as indicated in each image. () ISH analysis of the tissues of a MoM infected with CH040 demonstrated the presence of human macrophages (expressing CD68, brown staining) producing HIV RNA transcripts (black granules). Original magnification, ×100. () Cells from infected MoM tissues (bone marrow [ = 20], spleen [ = 11], liver [ = 11], and lung [ = 8]) were cultured with allogenic donor CD8–depleted feeder cells. Viral outgrowth was determined by the presence (black squares) or absence (white squares) of vRNA in the culture supernatants after 10 days. The number of human macrophages plated in each culture is graphed on the axis. We were able to measure outgrowth in 41 of 50 total samples (All tissues).