Studies of the genetic factors associated with human autoimmune disease suggest a multigenic origin of susceptibility; however, how these factors interact and through which tolerance pathways they operate generally remain to be defined. One key checkpoint occurs through the activity of the autoimmune regulator , which promotes central T cell tolerance. Recent reports have described a variety of dominant-negative mutations that likely contribute to human autoimmunity to a greater extent than previously thought. In families with these mutations, the penetrance of autoimmunity is incomplete, suggesting that other checkpoints play a role in preventing autoimmunity. Here, we tested whether a defect in LYN, an inhibitory protein tyrosine kinase that is implicated in systemic autoimmunity, could combine with an mutation to provoke organ-specific autoimmunity. Indeed, mice with a dominant-negative allele of and deficiency in LYN spontaneously developed organ-specific autoimmunity in the eye. We further determined that a small pool of retinal protein–specific T cells escaped thymic deletion as a result of the hypomorphic Aire function and that these cells also escaped peripheral tolerance in the presence of LYN-deficient dendritic cells, leading to highly destructive autoimmune attack. These findings demonstrate how 2 distinct tolerance pathways can synergize to unleash autoimmunity and have implications for the genetic susceptibility of autoimmune disease. 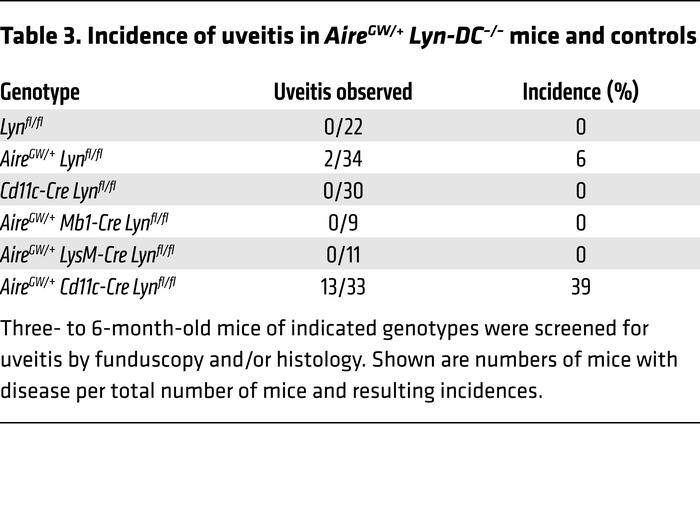 Incidence of uveitis in mice and controls