Radiotherapy is an effective treatment strategy for cancer, but a significant proportion of patients experience radiation-induced toxicity due to damage to normal tissue in the irradiation field. The use of chemical or biological approaches aimed at reducing or preventing normal tissue toxicity induced by radiotherapy is a long-held goal. Hypoxia-inducible factors (HIFs) regulate the production of factors that may protect several cellular compartments affected by radiation-induced toxicity. Pharmacological inhibitors of prolyl hydroxylase domain–containing enzymes (PHDs), which result in stabilization of HIFs, have recently been proposed as a new class of radioprotectors. In this review, radiation-induced toxicity in the gastrointestinal (GI) tract and the main cellular compartments studied in this context will be discussed. The effects of PHD inhibition on GI radioprotection will be described in detail. 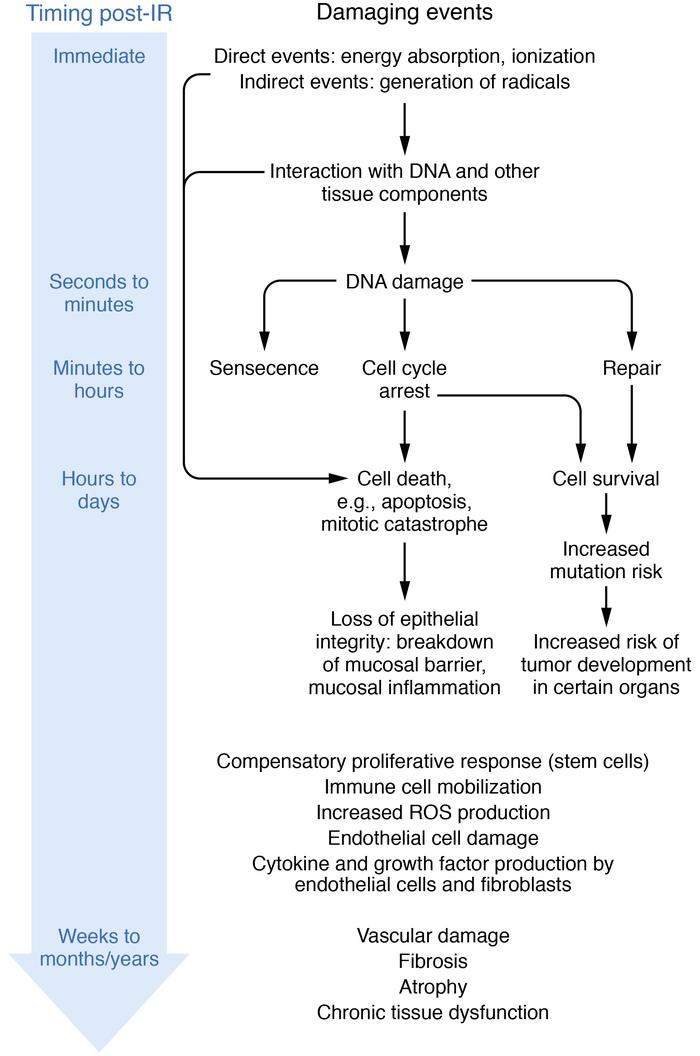 Damaging effects of irradiation on various cellular compartments can occur within 10–17–10–13 seconds to months or years after irradiation, resulting in a variety of acute or chronic effects. A selection of these damaging effects and their consequences is shown to the right-hand side of the timeline. While the sequence of early events (within hours of irradiation) has been studied in detail, the timing of and relationships between events occurring weeks to months or years after irradiation are more complicated and are still incompletely understood. This complexity is reflected by a lack of arrows between events. Figure adapted from ref. .