The rare patients who are able to spontaneously control HIV replication in the absence of therapy show signs of a particularly efficient cellular immune response. To identify the molecular determinants that underlie this response, we characterized the T cell receptor (TCR) repertoire directed at Gag293, the most immunoprevalent CD4 epitope in the HIV-1 capsid. HIV controllers from the ANRS CODEX cohort showed a highly skewed TCR repertoire that was characterized by a predominance of and variable genes, shared CDR3 motifs, and a high frequency of public clonotypes. The most prevalent public clonotypes generated TCRs with affinities at the higher end of values reported for naturally occurring TCRs. The high-affinity Gag293-specific TCRs were cross-restricted by up to 5 distinct alleles, accounting for the expression of these TCRs in HIV controllers of diverse genetic backgrounds. Transfer of these TCRs to healthy donor CD4+ T cells conferred high antigen sensitivity and polyfunctionality, thus recapitulating key features of the controller CD4 response. Transfer of a high-affinity Gag293-specific TCR also redirected CD8+ T cells to target HIV-1 capsid via nonconventional MHC II restriction. Together, these findings indicate that TCR clonotypes with superior functions are associated with HIV control. Amplification or transfer of such clonotypes may contribute to immunotherapeutic approaches aiming at a functional HIV cure. 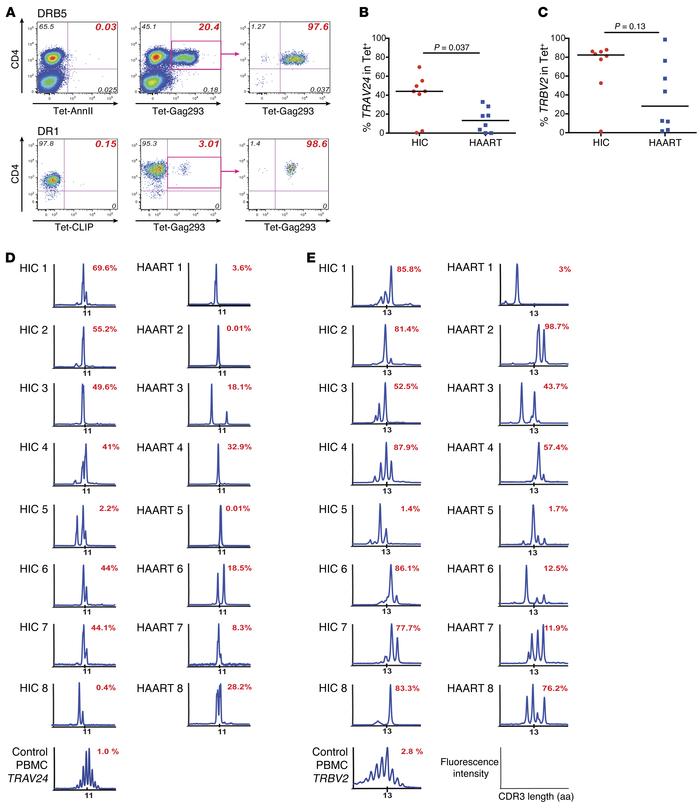 () Sorting of Gag293-specific CD4+ T cells with HLA-DR tetramers. Examples of primary CD4+ T cell lines labeled with DRB5 and DR1 tetramers. The percentage of Tet+ cells in the total CD4+ T cell population (middle plots) and in the sorted Tet+ population (right plots) is reported in red. Samples labeled with tetramers loaded with an irrelevant peptide (CLIP or Annexin II [AnnII]) were used as negative controls (left plots). ( and ) The percentages of Tet+ cells expressing the () or family () were determined by qPCR in the HIC and the HAART groups and compared by using the Mann-Whitney test. ( and ) CDR3 length profiles for the () and families () are shown for each patient analyzed. Healthy donor PBMCs were used as controls (bottom left). The percentage of the or family in the total or PCR product is reported in red. (–) HIC group: = 8; HAART group: = 8.