Angelman syndrome (AS) is a severe neurological disorder that is associated with prominent movement and balance impairments that are widely considered to be due to defects of cerebellar origin. Here, using the cerebellar-specific vestibulo-ocular reflex (VOR) paradigm, we determined that cerebellar function is only mildly impaired in the mouse model of AS. VOR phase-reversal learning was singularly impaired in these animals and correlated with reduced tonic inhibition between Golgi cells and granule cells. Purkinje cell physiology, in contrast, was normal in AS mice as shown by synaptic plasticity and spontaneous firing properties that resembled those of controls. Accordingly, neither VOR phase-reversal learning nor locomotion was impaired following selective deletion of in Purkinje cells. However, genetic normalization of αCaMKII inhibitory phosphorylation fully rescued locomotor deficits despite failing to improve cerebellar learning in AS mice, suggesting extracerebellar circuit involvement in locomotor learning. We confirmed this hypothesis through cerebellum-specific reinstatement of , which ameliorated cerebellar learning deficits but did not rescue locomotor deficits. This double dissociation of locomotion and cerebellar phenotypes strongly suggests that the locomotor deficits of AS mice do not arise from impaired cerebellar cortex function. Our results provide important insights into the etiology of the motor deficits associated with AS. 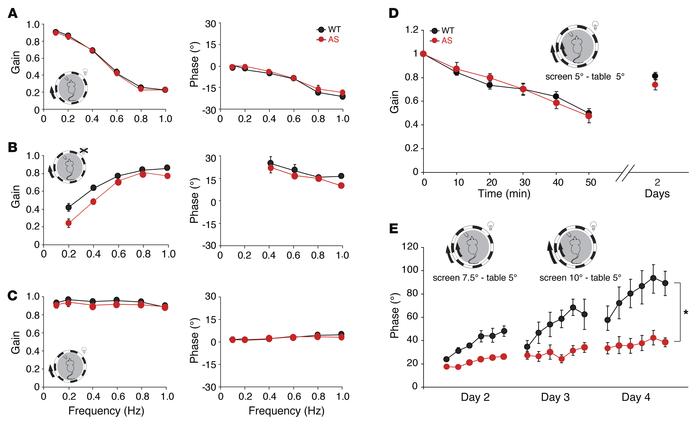 Baseline compensatory eye movements were evaluated by recording the OKR in the light (), the VOR in the dark (), and the VVOR in the light () ( = 7, for both WT and AS groups in all experiments). To test the OKR, the mice were subjected to visual stimulation by sinusoidally rotating the surrounding screen with the light on (). VOR responses, driven by vestibular input, were induced by rotating the table in the dark (). Combining both visual and vestibular stimulation by rotating the turntable while the light was on evoked the VVOR (). No differences between genotypes were observed in OKR, VOR, or VVOR with respect to gain and phase. () The adaptability of the VOR was tested with a VOR gain-decrease protocol, in which the turntable with the mouse was rotated at the same amplitude (5°) and direction as the surrounding screen. No difference was observed in the VOR gain decrease or in the consolidation of learning the next day. () Following the VOR gain-decrease protocol shown in , mice were subjected to a VOR phase-reversal protocol, in which the turntable with the mouse was rotated at a 5° amplitude and the surrounding screen at a 7.5° amplitude on day 2 and at a 10° amplitude on days 3 and 4, in the same direction. AS mice were significantly impaired in this more demanding cerebellar learning task. * < 0.05, as determined by repeated-measures ANOVA. Error bars indicate the SEM.