The mechanisms underlying the neurodevelopmental deficits associated with CHARGE syndrome, which include cerebellar hypoplasia, developmental delay, coordination problems, and autistic features, have not been identified. CHARGE syndrome has been associated with mutations in the gene encoding the ATP-dependent chromatin remodeler CHD7. CHD7 is expressed in neural stem and progenitor cells, but its role in neurogenesis during brain development remains unknown. Here we have shown that deletion of from cerebellar granule cell progenitors (GCps) results in reduced GCp proliferation, cerebellar hypoplasia, developmental delay, and motor deficits in mice. Genome-wide expression profiling revealed downregulated expression of the gene encoding the glycoprotein reelin () in -deficient GCps. Recessive mutations have been associated with severe cerebellar hypoplasia in humans. We found molecular and genetic evidence that reductions in expression contribute to GCp proliferative defects and cerebellar hypoplasia in GCp-specific mouse mutants. Finally, we showed that CHD7 is necessary for maintaining an open, accessible chromatin state at the locus. Taken together, this study shows that gene expression is regulated by chromatin remodeling, identifies CHD7 as a previously unrecognized upstream regulator of , and provides direct in vivo evidence that a mammalian CHD protein can control brain development by modulating chromatin accessibility in neuronal progenitors.

regulates the proliferation and survival of cerebellar GCps. 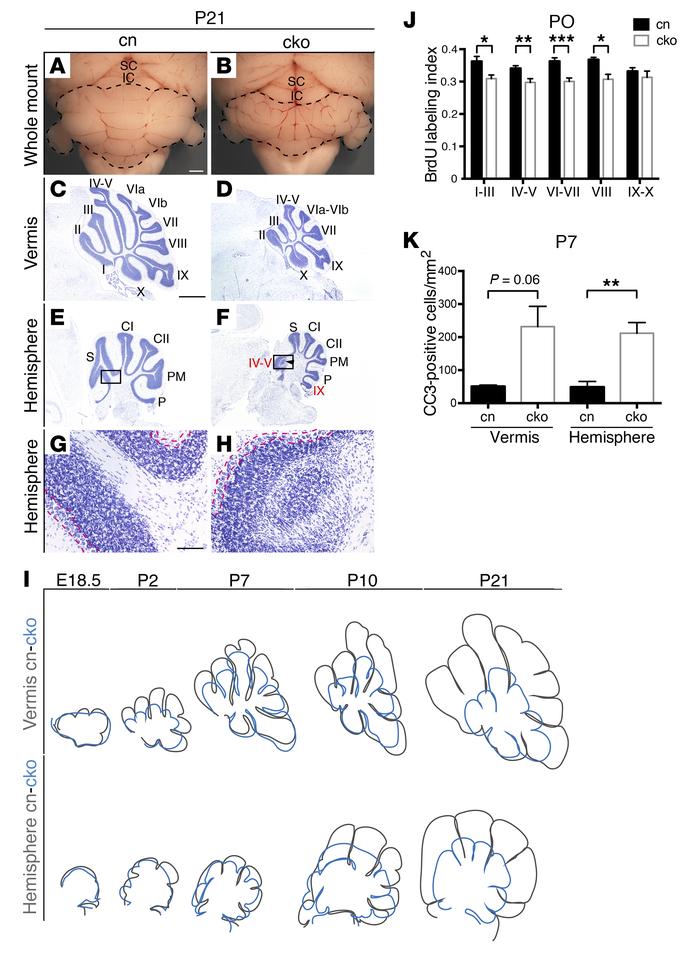 ( and ) Dorsal whole-mount images of P21 cn and GCp-specific conditional knockout (cko) mouse cerebella, anterior to the top. Note hypoplasia and abnormal foliation in the cko. (–) Cresyl violet–stained sagittal sections through the cerebellum, anterior to the left. Folia are numbered as in . Note hypoplasia and abnormal folia indicated by an arrowhead and labeled in red in the cko. ( and ) Magnified view of the boxed areas in and with PC layers outlined by red broken lines. () Traced outlines of representative cerebellar sections from cn (black) and cko (blue) mice at the indicated time points. Foliation defects are first noted at E18.5 in the vermis and P2 in the hemispheres. Hypoplasia becomes evident in the vermis by E18.5 and hemispheres by P10 (see also ). () Quantification of GCp proliferation in the P0 EGL by BrdU incorporation within a 1-hour time window. The BrdU labeling index for the indicated regions representing the fraction of BrdU-positive GCps in the EGL as counted in 100-by-100-μm areas. () The number of cleaved caspase-3–positive (CC3-positive) cells in the EGL per square millimeter of granule cell area at P7 is shown for vermis and hemispheres ( = 3 per genotype). * < 0.05, ** < 0.01, *** < 0.001, Student’s test. Scale bars: 300 μm (), 1 mm (), 100 μm ().