FGF21 and the late adaptive response to starvation in humans

FGF21 and the late adaptive response to starvation in humans

In mice, FGF21 is rapidly induced by fasting, mediates critical aspects of the adaptive starvation response, and displays a number of positive metabolic properties when administered pharmacologically. In humans, however, fasting does not consistently increase FGF21, suggesting a possible evolutionary divergence in FGF21 function. Moreover, many key aspects of FGF21 function in mice have been identified in the context of transgenic overexpression or administration of supraphysiologic doses, rather than in a physiologic setting. Here, we explored the dynamics and function of FGF21 in human volunteers during a 10-day fast. Unlike mice, which show an increase in circulating FGF21 after only 6 hours, human subjects did not have a notable surge in FGF21 until 7 to 10 days of fasting. Moreover, we determined that FGF21 induction was associated with decreased thermogenesis and adiponectin, an observation that directly contrasts with previous reports based on supraphysiologic dosing. Additionally, FGF21 levels increased after ketone induction, demonstrating that endogenous FGF21 does not drive starvation-mediated ketogenesis in humans. Instead, a longitudinal analysis of biologically relevant variables identified serum transaminases — markers of tissue breakdown — as predictors of FGF21. These data establish FGF21 as a fasting-induced hormone in humans and indicate that FGF21 contributes to the late stages of adaptive starvation, when it may regulate the utilization of fuel derived from tissue breakdown.

Human fasting is associated with downregulation of thermogenic activity in adipose tissue. 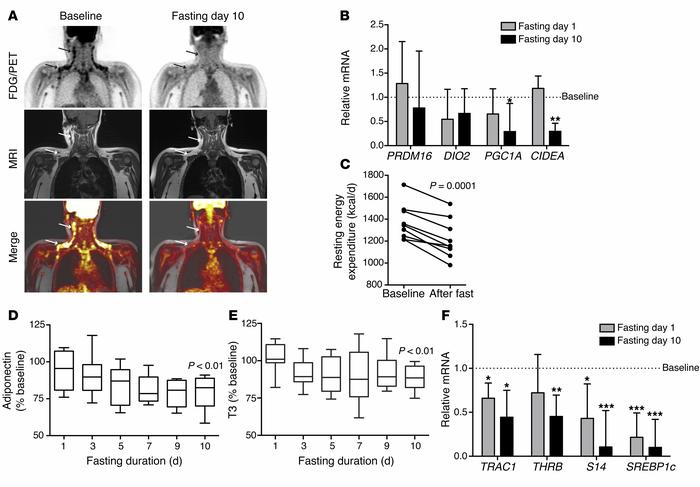