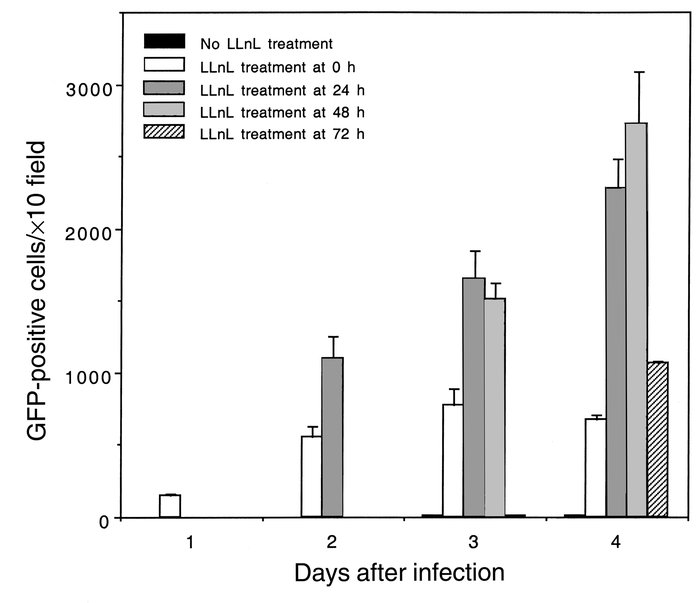 LLnL induces rAAV transduction within a specific time frame after infection. To study the kinetic effects of LLnL administration on AAV transduction, the proteasome inhibitor LLnL was added to the culture medium at different times after rAAV infection from the basolateral surface of airway epithelia. All cultures were infected with AV.GFP3ori (10,000 particles per cell) at 0 hours. LLnL (40 μM) was added at the time of infection (0 hours) or at 24-hour intervals after infection (24, 48, or 72 hours). The baseline of AAV transduction in the absence of LLnL treatment is also shown. GFP expression was quantified at 1, 2, 3, and 4 days after infection using indirect fluorescent microscopy and is presented as GFP-positive cells per ×10 field. The data in each panel represent the mean (± SEM) from three independent samples. The immediate increase in rAAV-mediated transgene expression after addition of LLnL is consistent with the hypothesis that LLnL acts by enhancing endosomal processing of viral particles from the cytoplasm to nucleus where it can be expressed. Furthermore, the addition of LLnL at 2–3 days after infection gave rise to higher levels of transgene gene expression than application of LLnL at the time of infection. These results support the notion that viral binding and internalization are not likely the steps enhanced by LLnL.