BACKGROUND. Ebola virus (EBOV) causes periodic outbreaks of life-threatening EBOV disease in Africa. Historically, these outbreaks have been relatively small and geographically contained; however, the magnitude of the EBOV outbreak that began in 2014 in West Africa has been unprecedented. The aim of this study was to describe the viral kinetics of EBOV during this outbreak and identify factors that contribute to outbreak progression.

METHODS. From July to December 2014, one laboratory in Sierra Leone processed over 2,700 patient samples for EBOV detection by quantitative PCR (qPCR). Viremia was measured following patient admission. Age, sex, and approximate time of symptom onset were also recorded for each patient. The data was analyzed using various mathematical models to find trends of potential interest.

RESULTS. The analysis revealed a significant difference ( = 2.7 × 10–77) between the initial viremia of survivors (4.02 log10 genome equivalents [GEQ]/ml) and nonsurvivors (6.18 log10 GEQ/ml). At the population level, patient viral loads were higher on average in July than in November, even when accounting for outcome and time since onset of symptoms. This decrease in viral loads temporally correlated with an increase in circulating EBOV-specific IgG antibodies among individuals who were suspected of being infected but shown to be negative for the virus by PCR.

CONCLUSIONS. Our results indicate that initial viremia is associated with outcome of the individual and outbreak duration; therefore, care must be taken in planning clinical trials and interventions. Additional research in virus adaptation and the impacts of host factors on EBOV transmission and pathogenesis is needed.

Characterization of the viral load levels. 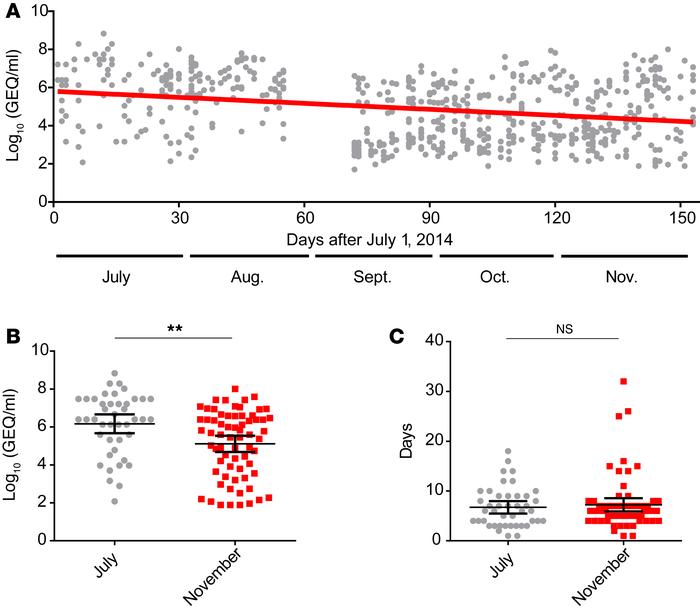 When applicable, the arithmetic mean is shown, and the error bars represent the 95% CI. () Initial viral loads of the selected 632 patients throughout the outbreak in Kailahun, Sierra Leone. Linear regression is shown in red. ( = 632). () Initial viral loads of patients for the first 2 weeks of July ( = 43) and the last 2 weeks of November ( = 67). () Number of days between the reported date of symptom onset and the date of the initial sampling at the EMC on the same data set from . Two-tailed, unpaired tests. **0.001 < < 0.01.