Primary myelofibrosis (PMF) is a clonal hematologic malignancy characterized by BM fibrosis, extramedullary hematopoiesis, circulating CD34+ cells, splenomegaly, and a propensity to evolve to acute myeloid leukemia. Moreover, the spleen and BM of patients harbor atypical, clustered megakaryocytes, which contribute to the disease by secreting profibrotic cytokines. Here, we have revealed that megakaryocytes in PMF show impaired maturation that is associated with reduced GATA1 protein. In investigating the cause of GATA1 downregulation, our gene-expression study revealed the presence of the -deficient gene signature, which is associated with defective ribosomal protein function and linked to the erythroid lineage in 5q deletion myelodysplastic syndrome. Surprisingly, reduced GATA1 expression and impaired differentiation were limited to megakaryocytes, consistent with a proproliferative effect of a GATA1 deficiency on this lineage. Importantly, expression of effectively rescued maturation of PMF megakaryocytes. Together, these results suggest that ribosomal deficiency contributes to impaired megakaryopoiesis in myeloproliferative neoplasms.

GATA1 protein expression is dysregulated in PMF and the mouse models of the MPNs. 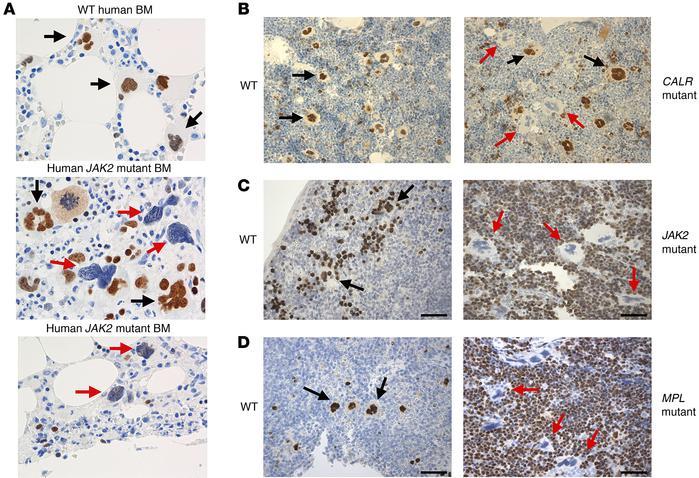