Patients with diabetic ketoacidosis (DKA) are uniquely predisposed to mucormycosis, an angioinvasive fungal infection with high mortality. Previously, we demonstrated that invades the endothelium via binding of fungal CotH proteins to the host receptor GRP78. Here, we report that surface expression of GRP78 is increased in endothelial cells exposed to physiological concentrations of β-hydroxy butyrate (BHB), glucose, and iron that are similar to those found in DKA patients. Additionally, expression of . CotH was increased within hours of incubation with DKA-associated concentrations of BHB, glucose, and iron, augmenting the ability of . to invade and subsequently damage endothelial cells in vitro. BHB exposure also increased fungal growth and attenuated . neutrophil-mediated damage. Further, mice given BHB developed clinical acidosis and became extremely susceptible to mucormycosis, but not aspergillosis, while sodium bicarbonate reversed this susceptibility. BHB-related acidosis exerted a direct effect on both GRP78 and CotH expression, an effect not seen with lactic acidosis. However, BHB also indirectly compromised the ability of transferrin to chelate iron, as iron chelation combined with sodium bicarbonate completely protected endothelial cells from -mediated invasion and damage. Our results dissect the pathogenesis of mucormycosis during ketoacidosis and reinforce the importance of careful metabolic control of the acidosis to prevent and manage this infection.

BHB, glucose, and iron concentrations consistent with those seen in DKA patients induce expression of GRP78 in a time- and concentration-dependent manner. 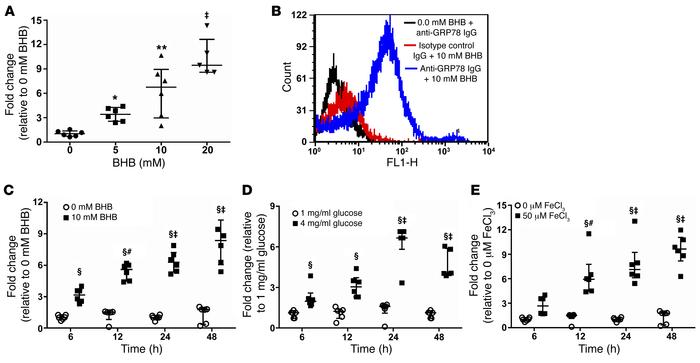 () Endothelial cells were incubated with varying concentrations of BHB for 24 hours before quantification of the expression of host by real-time RT-PCR (normalized to housekeeping gene). () Flow cytometry testing using anti-GRP78 antibodies demonstrated enhanced cell surface expression of GRP78 protein on endothelial cells exposed to 10 mM BHB compared with endothelial cells without exposure to BHB. Cell surface staining of endothelial cells with an isotype matching control IgG was included as a negative control. (–) Kinetics of endothelial cell expression in response to BHB (), glucose (), or iron () as quantified by qRT-PCR. Data in qRT-PCR ( = 6 from 2 independent experiments for each figure) are expressed as median ± interquartile range. * < 0.004 vs. 0 mM BHB; ** < 0.01 vs. 0 or 5 mM BHB; ‡ < 0.02 vs. 0, 5, or 10 mM BHB; § < 0.005 vs. no stimulus at each time point; §# < 0.05 vs. 50 μM FeCl3 or 10 mM BHB at 6 hours; §‡ < 0.01 vs. 50 μM FeCl3, 4 mg/ml glucose, or 10 mM BHB at 6 or 12 hours by Wilcoxon rank sum test.