Alloreactive donor T cells are the driving force in the induction of graft-versus-host disease (GVHD), yet little is known about T cell metabolism in response to alloantigens after hematopoietic cell transplantation (HCT). Here, we have demonstrated that donor T cells undergo metabolic reprograming after allogeneic HCT. Specifically, we employed a murine allogeneic BM transplant model and determined that T cells switch from fatty acid β-oxidation (FAO) and pyruvate oxidation via the tricarboxylic (TCA) cycle to aerobic glycolysis, thereby increasing dependence upon glutaminolysis and the pentose phosphate pathway. Glycolysis was required for optimal function of alloantigen-activated T cells and induction of GVHD, as inhibition of glycolysis by targeting mTORC1 or 6-phosphofructo-2-kinase/fructose-2,6-biphosphatase 3 (PFKFB3) ameliorated GVHD mortality and morbidity. Together, our results indicate that donor T cells use glycolysis as the predominant metabolic process after allogeneic HCT and suggest that glycolysis has potential as a therapeutic target for the control of GVHD. 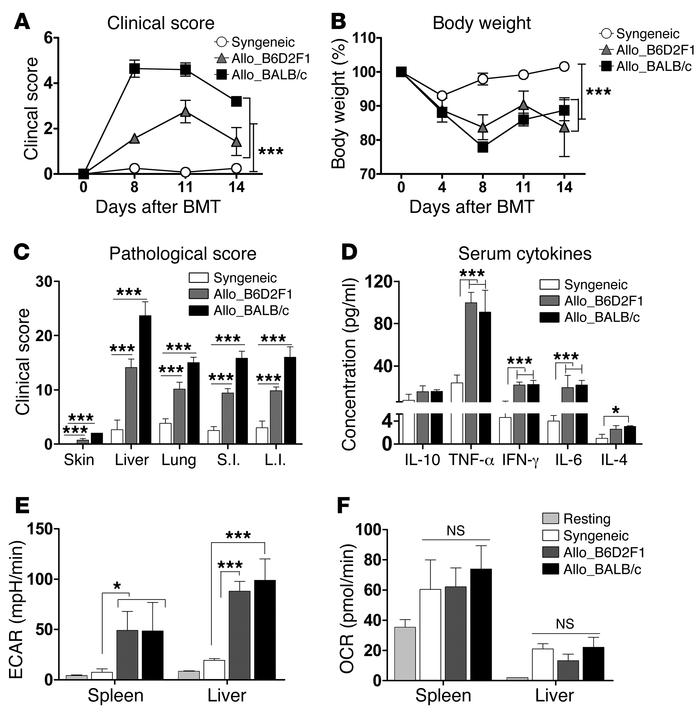 Lethally irradiated B6, B6D2F1 (1,100 cGy), or BALB/c (700 cGy) mice were transplanted with 5 × 106/mouse TCD-BM plus 1–2 × 106/mouse T cells isolated from B6 donors. After 14 days, recipients were euthanized, and blood and organs were collected. ( and ) The GVHD clinical score () and body weight loss () during experimental time course are shown. () Pathological score are indicated in recipient skin, liver, lung, small intestine (S.I.), and large intestine (L.I.). () Cytokine levels in the recipient sera are displayed. T cells were isolated from spleens or livers of the syngeneic or allogeneic recipients and measured for ECAR and OCR. ( and ) Summary of ECAR () or OCR () rate of T cells from recipient spleen or liver on day 14 after BMT. (–) Data were representative of three experiments ( = 7–10 per group). ( and ) The data were combined from three independent experiments ( = 15 per group). Bar graph shows the mean ± SEM. * < 0.05; *** < 0.001, Mann-Whitney test ( and ), two-tailed Student test (–).