Severe asthma (SA) is a challenge to control, as patients are not responsive to high doses of systemic corticosteroids (CS). In contrast, mild-moderate asthma (MMA) is responsive to low doses of inhaled CS, indicating that Th2 cells, which are dominant in MMA, do not solely orchestrate SA development. Here, we analyzed broncholalveolar lavage cells isolated from MMA and SA patients and determined that IFN-γ (Th1) immune responses are exacerbated in the airways of individuals with SA, with reduced Th2 and IL-17 responses. We developed a protocol that recapitulates the complex immune response of human SA, including the poor response to CS, in a murine model. Compared with WT animals, mice subjected to this SA model failed to mount airway hyperresponsiveness (AHR) without appreciable effect on airway inflammation. Conversely, AHR was not reduced in mice, although airway inflammation was lower. Computer-assisted pathway analysis tools linked IFN-γ to secretory leukocyte protease inhibitor (SLPI), which is expressed by airway epithelial cells, and IFN-γ inversely correlated with SLPI expression in SA patients and the mouse model. In mice subjected to our SA model, forced SLPI expression decreased AHR in the absence of CS, and it was further reduced when SLPI was combined with CS. Our study identifies a distinct immune response in SA characterized by a dysregulated IFN-γ/SLPI axis that affects lung function. 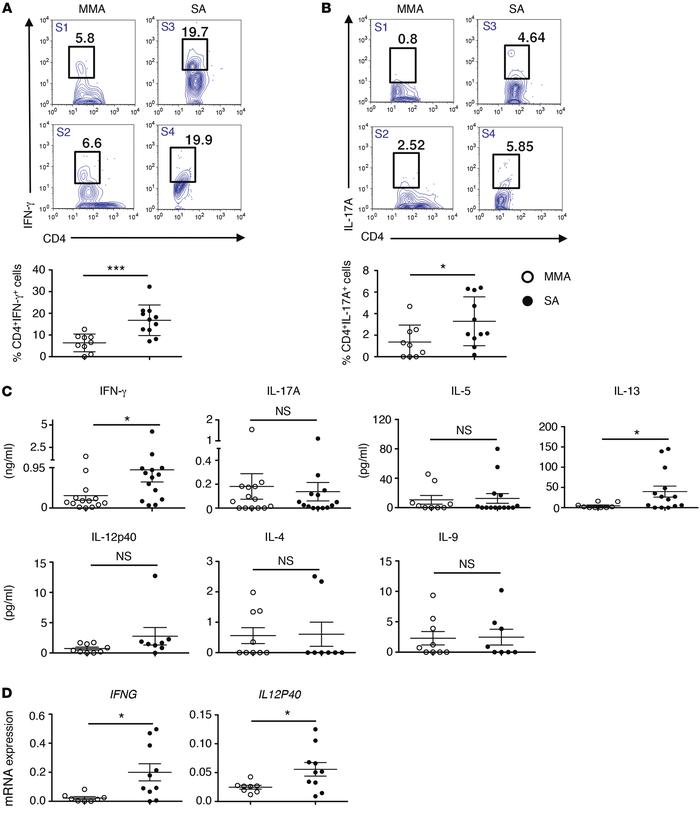