Meningioma-1 (MN1) overexpression is frequently observed in patients with acute myeloid leukemia (AML) and is predictive of poor prognosis. In murine models, forced expression of MN1 in hematopoietic progenitors induces an aggressive myeloid leukemia that is strictly dependent on a defined gene expression program in the cell of origin, which includes the homeobox genes and as key components. Here, we have shown that this program is controlled by two histone methyltransferases, MLL1 and DOT1L, as deletion of either or in MN1-expressing cells abrogated the cell of origin–derived gene expression program, including the expression of cluster genes. In murine models, genetic inactivation of either or impaired MN1-mediated leukemogenesis. We determined that and are coexpressed with in a subset of clinical leukemia, and human leukemias were sensitive to pharmacologic inhibition of DOT1L. Together, these data point to DOT1L as a potential therapeutic target in AML. In addition, our findings suggest that epigenetic modulation of the interplay between an oncogenic lesion and its cooperating developmental program has therapeutic potential in AML.

Mutz3 cells respond to DOT1L inhibition while several other cell lines with high expression are unaffected. 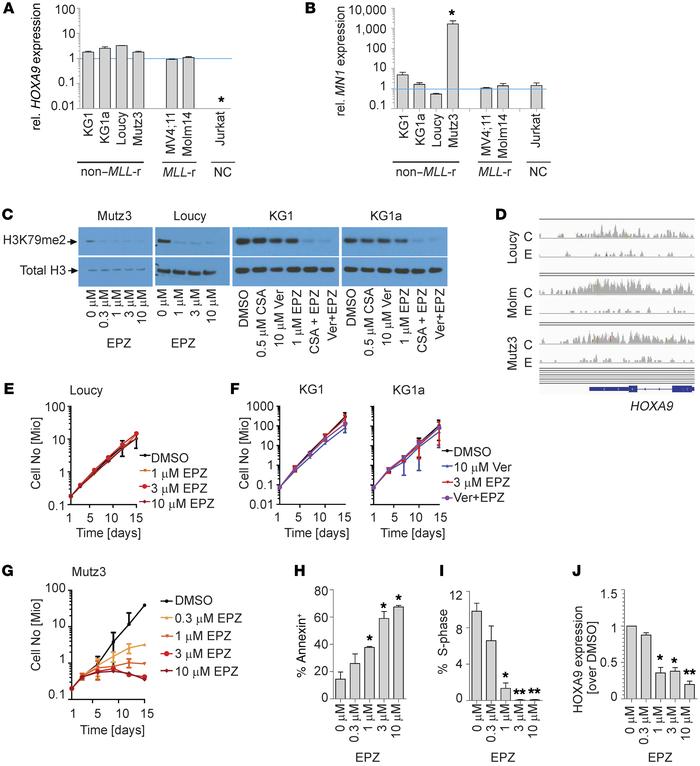