Thrombosis is a common, life-threatening consequence of systemic infection; however, the underlying mechanisms that drive the formation of infection-associated thrombi are poorly understood. Here, using a mouse model of systemic Typhimurium infection, we determined that inflammation in tissues triggers thrombosis within vessels via ligation of C-type lectin–like receptor-2 (CLEC-2) on platelets by podoplanin exposed to the vasculature following breaching of the vessel wall. During infection, mice developed thrombi that persisted for weeks within the liver. Bacteria triggered but did not maintain this process, as thrombosis peaked at times when bacteremia was absent and bacteria in tissues were reduced by more than 90% from their peak levels. Thrombus development was triggered by an innate, TLR4-dependent inflammatory cascade that was independent of classical glycoprotein VI–mediated (GPVI-mediated) platelet activation. After infection, IFN-γ release enhanced the number of podoplanin-expressing monocytes and Kupffer cells in the hepatic parenchyma and perivascular sites and absence of TLR4, IFN-γ, or depletion of monocytic-lineage cells or CLEC-2 on platelets markedly inhibited the process. Together, our data indicate that infection-driven thrombosis follows local inflammation and upregulation of podoplanin and platelet activation. The identification of this pathway offers potential therapeutic opportunities to control the devastating consequences of infection-driven thrombosis without increasing the risk of bleeding. 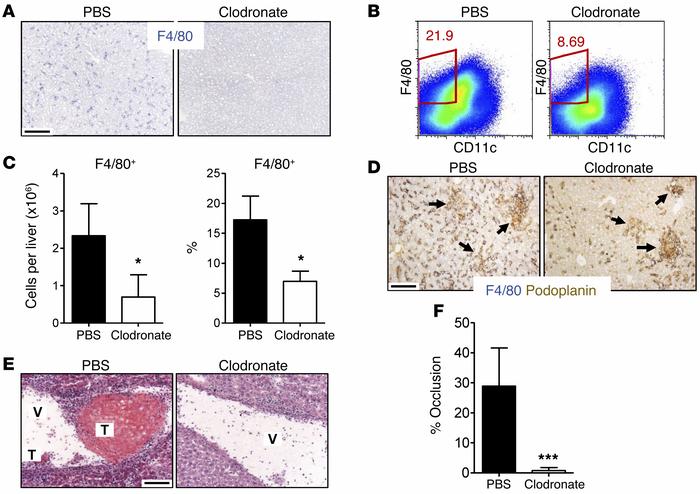 () WT mice were treated i.p. with PBS-loaded or clodronate-loaded liposomes for 24 hours, and macrophage depletion was examined on frozen liver sections by IHC: F4/80 (blue). Images are representative of an experiment with 3 mice per group. (–) WT mice were treated with PBS- or clodronate-loaded liposomes 24 hours prior to infection with 5 × 105 CFU . Typhimurium and every 48 hours subsequently. Leukocytes were isolated from the liver at day 7 after infection, and macrophage populations were examined by flow cytometry. () Representative FACS plots and () absolute number/proportion of F4/80+ cells per liver at day 7 after infection. () Macrophage expression of podoplanin (brown) was examined by IHC in conjunction with F4/80 (blue). () Thrombosis was examined by H&E staining and () was quantified by point counting of large vessels per tissue section. Data in – are representative of 2 experiments where = 5 in each group. Graphs show mean + SD; statistical significance was determined by comparison between PBS liposome– and clodronate liposome–treated mice. * ≤ 0.05; *** ≤ 0.001, Mann-Whitney sum of ranks test. All images were obtained from frozen liver sections. Scale bars: 100 μm. Arrows indicate inflammatory foci.