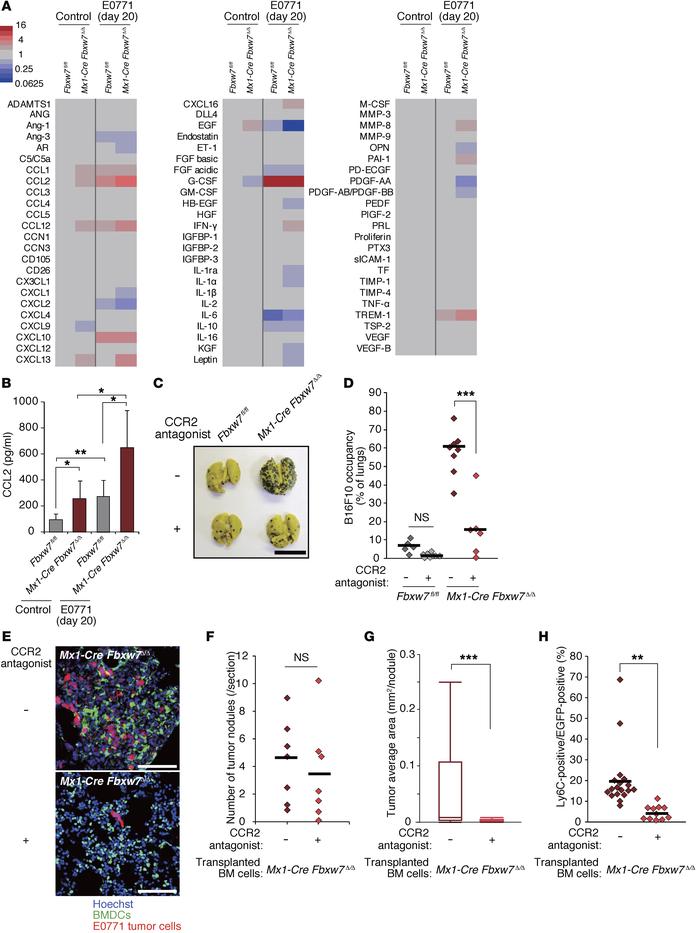 () Serum cytokine levels in and ΔΔ mice after orthotopic transplantation of tdTomato-labeled E0771 cells or in nontransplant controls. Optical densities for cytokines are indicated according to the color scale. See also Supplemental Figure 5. () Serum concentration of CCL2, determined by ELISA, in the indicated mice transplanted with tdTomato-labeled E0771 cells. Data are mean ± SD ( = 4 per group). ( and ) Gross appearance of the lungs () and their occupancy by visible B16F10 tumor colonies () for ( = 5 [not treated]; 8 [treated]) and ΔΔ ( = 8 [not treated]; 6 [treated]) mice injected with B16F10 cells and treated or not with the CCR2 antagonist propagermanium. (–) WT mice were reconstituted with ΔΔ BM cells, subjected to orthotopic transplantation with tdTomato-labeled E0771 cells, and treated or not with propagermanium ( = 7). At 20 days after tumor cell transplantation, lungs were subjected to fluorescence microscopy (), and number of tumor nodules () and average tumor area () were determined. () The percentage of EGFP+ BMDCs positive for Ly6C in the tumor-bearing lungs of mice as in – was determined by immunohistofluorescence analysis. Scale bars: 10 mm (); 100 μm (). Horizontal bars in , , and indicate means; box and whisker plots in depict the smallest value, lower quartile, median, upper quartile, and largest value. * < 0.05, ** < 0.01, *** < 0.001, 1-way ANOVA and Bonferroni test ( and ) or 2-tailed Student’s test (–).