Unlike other picornaviruses, hepatitis A virus (HAV) is cloaked in host membranes when released from cells, providing protection from neutralizing antibodies and facilitating spread in the liver. Acute HAV infection is typified by minimal type I IFN responses; therefore, we questioned whether plasmacytoid dendritic cells (pDCs), which produce IFN when activated, are capable of sensing enveloped virions (eHAV). Although concentrated nonenveloped virus failed to activate freshly isolated human pDCs, these cells produced substantial amounts of IFN-α via TLR7 signaling when cocultured with infected cells. pDCs required either close contact with infected cells or exposure to concentrated culture supernatants for IFN-α production. In isopycnic and rate-zonal gradients, pDC-activating material cosedimented with eHAV but not membrane-bound acetylcholinesterase, suggesting that eHAV, and not viral RNA exosomes, is responsible for IFN-α induction. pDC activation did not require virus replication and was associated with efficient eHAV uptake, which was facilitated by phosphatidylserine receptors on pDCs. In chimpanzees, pDCs were transiently recruited to the liver early in infection, during or shortly before maximal intrahepatic IFN-stimulated gene expression, but disappeared prior to inflammation onset. Our data reveal that, while membrane envelopment protects HAV against neutralizing antibody, it also facilitates an early but limited detection of HAV infection by pDCs. 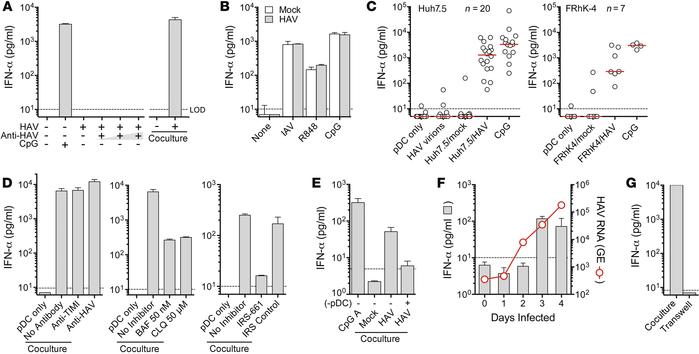