Cornelia de Lange syndrome (CdLS) is a genetically heterogeneous disorder that presents with extensive phenotypic variability, including facial dysmorphism, developmental delay/intellectual disability (DD/ID), abnormal extremities, and hirsutism. About 65% of patients harbor mutations in genes that encode subunits or regulators of the cohesin complex, including , , , , and . Wiedemann-Steiner syndrome (WDSTS), which shares CdLS phenotypic features, is caused by mutations in lysine-specific methyltransferase 2A (). Here, we performed whole-exome sequencing (WES) of 2 male siblings clinically diagnosed with WDSTS; this revealed a hemizygous, missense mutation in that was predicted to be deleterious. Extensive clinical evaluation and WES of 32 Turkish patients clinically diagnosed with CdLS revealed the presence of a de novo heterozygous nonsense mutation in 1 patient without characteristic WDSTS features. We also identified de novo heterozygous mutations in or that affected RNA splicing in 2 independent patients with combined CdLS and WDSTS features. Furthermore, in families from 2 separate world populations segregating an autosomal-recessive disorder with CdLS-like features, we identified homozygous mutations in , which encodes a core transcriptional regulatory pathway component. Together, our data, along with recent transcriptome studies, suggest that CdLS and related phenotypes may be “transcriptomopathies” rather than cohesinopathies. 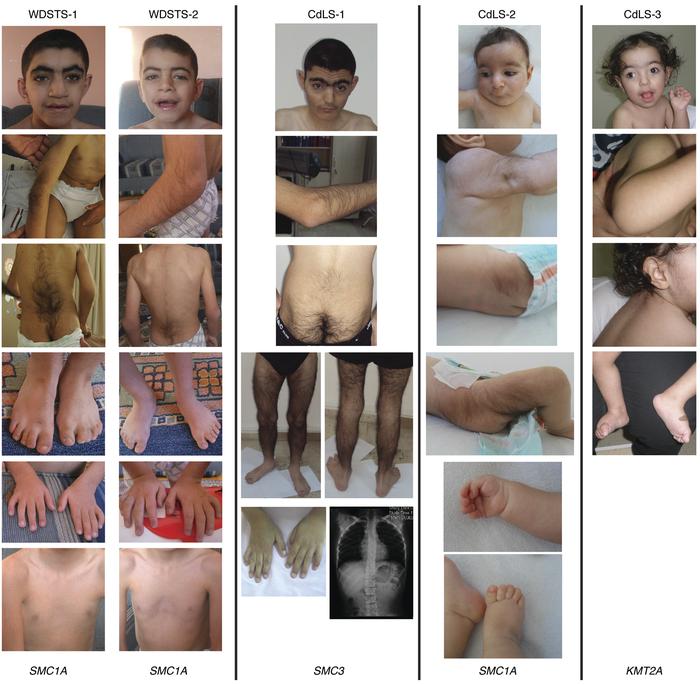 Note the eyebrows of the WDSTS-1 and WDSTS-2 are bushy, whereas the eyebrows of CdLS-1 and CdLS-3 have the typical arched appearance of CdLS with synophrys. WDSTS-1 and WDSTS-2 also have square and bulbous nasal tips. The second row of images demonstrates hirsutism of elbows in WDSTS-1, WDSTS-2, CdLS-1, and CdLS-2. Also of note is hirsutism of lower back, buttocks, legs, and face in the subjects. All individuals have modest brachydactyly of fingers and/or toes, and WDSTS-1, WDSTS-2, and CdLS-1 have fifth finger clinodactyly. WDSTS-1 and WDSTS-2 have pectus excavatum, and in CdLS-1, mild mid-thoracic scoliosis can be seen on the plain radiograph of the chest.