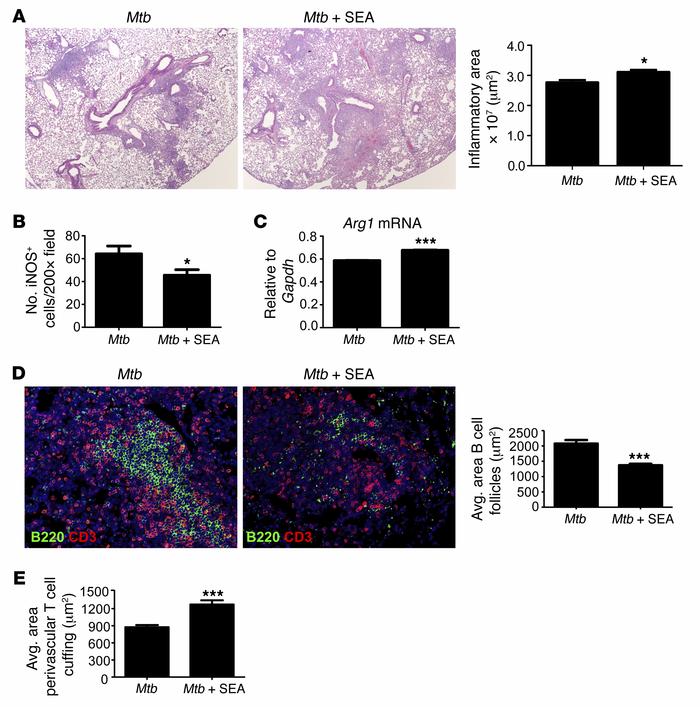 C57BL/6 mice were aerosol infected with and immunized with SEA ( + SEA) or saline () on d15 after infection. () Pulmonary inflammation was assessed on d30 after infection on H&E-stained formalin-fixed, paraffin embedded (FFPE) lung sections. Magnification: ×40. Total area occupied by inflammatory lesions per lobe was quantified. () FFPE sections from infected lungs were processed for immunofluorescence using antibodies specific for iNOS and F4/80, and the number of iNOS-expressing F4/80+ cells per 200× field was counted. () CD11c+ cells were sorted from the lungs of SEA-treated -infected mice and -infected mice, and level of mRNA relative to was determined by RT-PCR. (–) FFPE lung sections were also stained using antibodies specific for B220 and CD3. Magnification: ×200. The average size of B cell follicles within granulomas () and the average area occupied by perivascular T cell cuffing () were calculated. = 4–8 mice per group. Lungs of all mice were included in the analysis; one representative image per group is shown. * ≤ 0.05, *** ≤ 0.001; unpaired, 2-tailed Student’s test. Results are representative of 2 independent experiments.