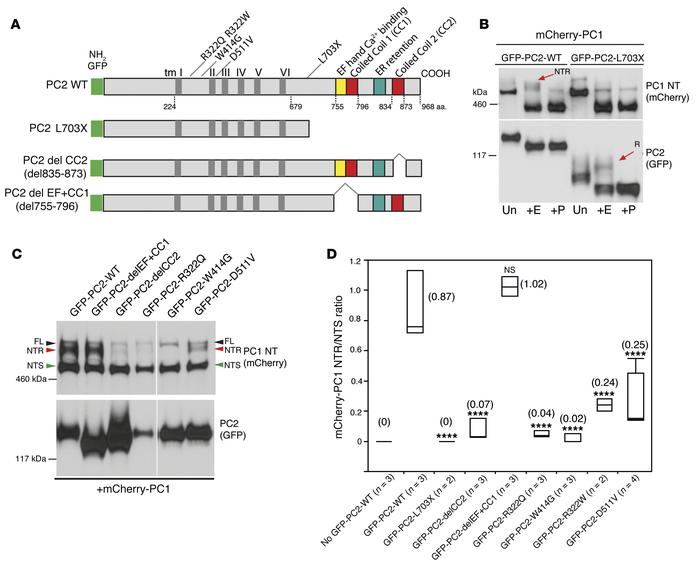 () Diagram of WT and mutant human PC2 used in the cotransfection experiments ( and ) showing the positions of domains, deletions, and aa substitutions. () mCherry-PC1 cotransfected with WT GFP-PC2 or PC2 lacking the C-terminal cytoplasmic tail (GFP-PC2-L703X) into RCTE cells. Detection of PC1 NT (mCherry) revealed EndoH-resistant PC1-NTR (arrow) only in WT-PC2, but not in PC2-L703X, cotransfected cells. Detection of PC2 (GFP) shows that a portion of PC2-L703X was EndoH resistant (R; arrow). Representative blots are shown from 3 independent experiments. () Cotransfection of various GFP-PC2 mutants and mCherry-PC1 into RCTE cells showing the effect of PC2 mutations on the PC1 glycosylation pattern and PC2 products. Deletion of the EF hand and coiled coil 1 (delEF+CC1) did not disrupt PC1 maturation, but deletion of coiled coil 2 (delCC2) greatly reduced the level of the PC1-NTR product. Pathogenic missense substitutions in PC2, especially p.R322Q and p.W414G, also had a negative effect on PC1 maturation. Representative blots are shown from 3 independent experiments. () Quantification of the ratio of PC1-NTR to NTS glycoforms obtained from the cotransfection experiments with WT and mutant PC2 GFP constructs ( and ). Deletion mutants removing CC2 but not EF+CC1 largely disrupted PC1 maturation, while missense mutations also significantly disrupted maturation. = 3 for all except R322W ( = 2) and D511V ( = 4). Quartile box plots represent the median, quartiles, and minimum/maximum range, with the mean of each group in parentheses. values are shown as compared with GFP-PC2-WT (control) with the Student’s test; **** < 0.0001.