Chronic GVHD (cGVHD) is the major cause of late, nonrelapse death following stem cell transplantation and characteristically develops in organs such as skin and lung. Here, we used multiple murine models of cGVHD to investigate the contribution of macrophage populations in the development of cGVHD. Using an established IL-17–dependent sclerodermatous cGVHD model, we confirmed that macrophages infiltrating the skin are derived from donor bone marrow (F4/80+CSF-1R+CD206+iNOS–). Cutaneous cGVHD developed in a CSF-1/CSF-1R–dependent manner, as treatment of recipients after transplantation with CSF-1 exacerbated macrophage infiltration and cutaneous pathology. Additionally, recipients of grafts from mice had substantially less macrophage infiltration and cutaneous pathology as compared with those receiving wild-type grafts. Neither CCL2/CCR2 nor GM-CSF/GM-CSFR signaling pathways were required for macrophage infiltration or development of cGVHD. In a different cGVHD model, in which bronchiolitis obliterans is a prominent manifestation, F4/80+ macrophage infiltration was similarly noted in the lungs of recipients after transplantation, and lung cGVHD was also IL-17 and CSF-1/CSF-1R dependent. Importantly, depletion of macrophages using an anti–CSF-1R mAb markedly reduced cutaneous and pulmonary cGVHD. Taken together, these data indicate that donor macrophages mediate the development of cGVHD and suggest that targeting CSF-1 signaling after transplantation may prevent and treat cGVHD. 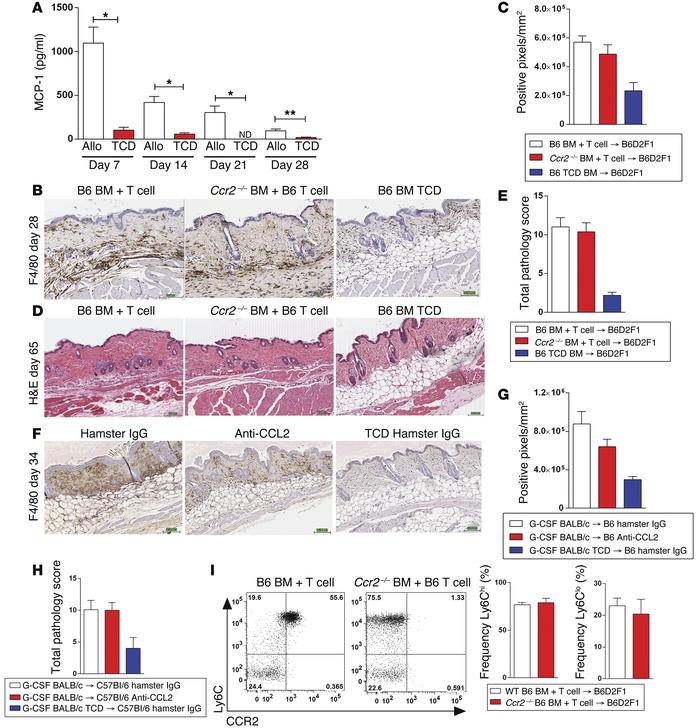