Signaling via the MyD88/IRAK pathway in T cells is indispensable for cell survival; however, it is not known whether this pathway functions in the progression of T acute lymphoblastic leukemia (T-ALL). Here, we determined that compared with thymic and peripheral T cells, T-ALL cells from patients have elevated levels of and mRNA as well as increased total and phosphorylated protein. Targeted inhibition of IRAK1 and IRAK4, either with shRNA or with a pharmacological IRAK1/4 inhibitor, dramatically impeded proliferation of T-ALL cells isolated from patients and T-ALL cells in a murine leukemia model; however, IRAK1/4 inhibition had little effect on cell death. We screened several hundred FDA-approved compounds and identified a set of drugs that had enhanced cytotoxic activity when combined with IRAK inhibition. Administration of an IRAK1/4 inhibitor or IRAK knockdown in combination with either ABT-737 or vincristine markedly reduced leukemia burden in mice and prolonged survival. IRAK1/4 signaling activated the E3 ubiquitin ligase TRAF6, increasing K63-linked ubiquitination and enhancing stability of the antiapoptotic protein MCL1; therefore, IRAK inhibition reduced MCL1 stability and sensitized T-ALL to combination therapy. These studies demonstrate that IRAK1/4 signaling promotes T-ALL progression through stabilization of MCL1 and suggest that impeding this pathway has potential as a therapeutic strategy to enhance chemotherapeutic efficacy.

and expression levels and activation status in T-ALL. 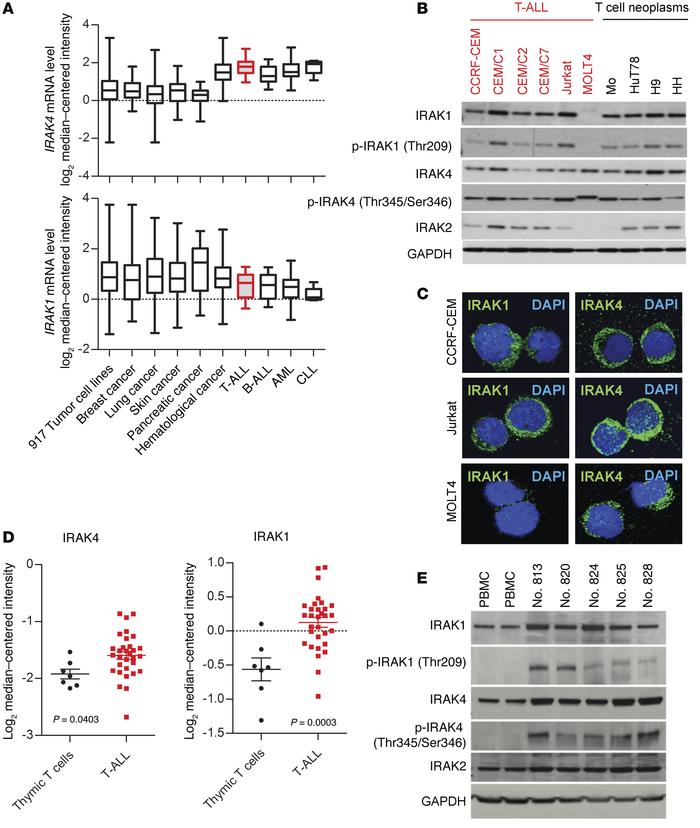