Tuberous sclerosis (TSC) is an autosomal dominant genetic disorder in which benign hamartomas develop in multiple organs, caused by mutations in either TSC1 or TSC2. We developed a murine model of Tsc2 disease using a gene targeting approach. Tsc2-null embryos die at embryonic days 9.5–12.5 from hepatic hypoplasia. Tsc2 heterozygotes display 100% incidence of multiple bilateral renal cystadenomas, 50% incidence of liver hemangiomas, and 32% incidence of lung adenomas by 15 months of age. Progression to renal carcinoma, fatal bleeding from the liver hemangiomas, and extremity angiosarcomas all occur at a rate of less than 10%. The renal cystadenomas develop from intercalated cells of the cortical collecting duct and uniformly express gelsolin at high levels, enabling detection of early neoplastic lesions. The tumor expression pattern of the mice is influenced by genetic background, with fewer large renal cystadenomas in the outbred Black Swiss background and more angiosarcomas in 129/SvJae chimeric mice. The slow growth of the tumors in the heterozygote mice matches the limited growth potential of the great majority of TSC hamartomas, and the influence of genetic background on phenotype correlates with the marked variability in expression of TSC seen in patients. 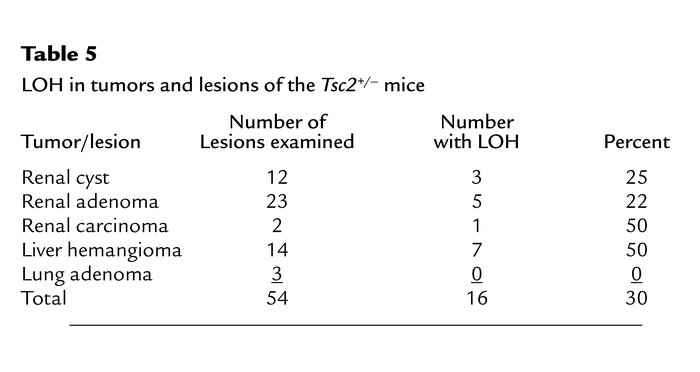 LOH in tumors and lesions of the mice