Bicc1 is a genetic determinant of osteoblastogenesis and bone mineral density

Bicc1 is a genetic determinant of osteoblastogenesis and bone mineral density

Patient bone mineral density (BMD) predicts the likelihood of osteoporotic fracture. While substantial progress has been made toward elucidating the genetic determinants of BMD, our understanding of the factors involved remains incomplete. Here, using a systems genetics approach in the mouse, we predicted that bicaudal C homolog 1 (), which encodes an RNA-binding protein, is responsible for a BMD quantitative trait locus (QTL) located on murine chromosome 10. Consistent with this prediction, mice heterozygous for a null allele of had low BMD. We used a coexpression network–based approach to determine how influences BMD. Based on this analysis, we inferred that was involved in osteoblast differentiation and that polycystic kidney disease 2 () was a downstream target of . Knock down of and impaired osteoblastogenesis, and deficiency–dependent osteoblast defects were rescued by overexpression. Last, in 2 human BMD genome-wide association (GWAS) meta-analyses, we identified SNPs in and that were associated with BMD. These results, in both mice and humans, identify as a genetic determinant of osteoblastogenesis and BMD and suggest that it does so by regulating transcript levels.

Network analysis and causality modeling identify as a putative downstream target of . 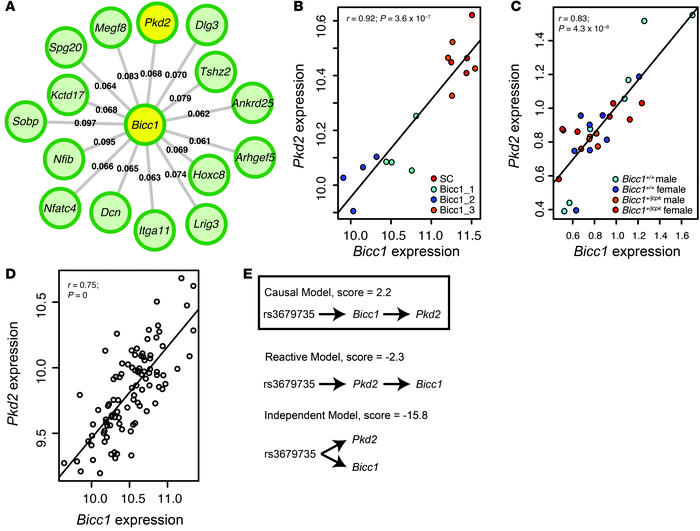