The pathogenesis of type 2 diabetes involves abnormalities in insulin action, insulin secretion, and endogenous glucose output (EGO). However, the sequence with which these abnormalities develop and their relative contributions to the deterioration in glucose tolerance remain unclear in the absence of a detailed longitudinal study. We measured insulin action, insulin secretion, and EGO longitudinally in 17 Pima Indians, in whom glucose tolerance deteriorated from normal (NGT) to impaired (IGT) to diabetic over 5.1 ± 1.4 years. Transition from NGT to IGT was associated with an increase in body weight, a decline in insulin-stimulated glucose disposal, and a decline in the acute insulin secretory response (AIR) to intravenous glucose, but no change in EGO. Progression from IGT to diabetes was accompanied by a further increase in body weight, further decreases in insulin-stimulated glucose disposal and AIR, and an increase in basal EGO. Thirty-one subjects who retained NGT over a similar period also gained weight, but their AIR increased with decreasing insulin-stimulated glucose disposal. Thus, defects in insulin secretion and insulin action occur early in the pathogenesis of diabetes. Intervention to prevent diabetes should target both abnormalities. 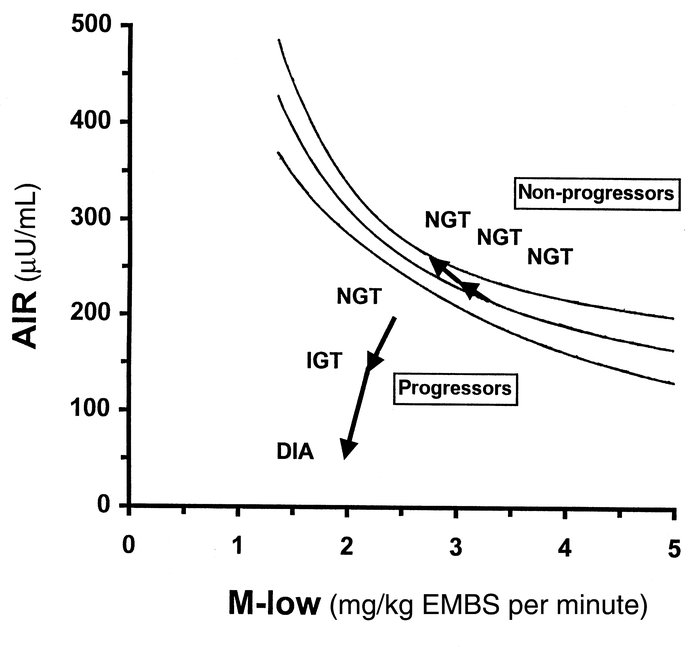 Changes in AIR relative to changes in M-low in 11 Pima Indian subjects in whom glucose tolerance deteriorated from normal (NGT) to impaired (IGT) to diabetic(DIA) (progressors), and in 23 subjects who retained NGT (nonprogressors). The lines represent the prediction line and the lower and upper limits of the 95% confidence interval of the regression between AIR and M-low as derived from a reference population of 277 Pima Indians with NGT.