Genetic variation at the chromosome 9p21 risk locus promotes cardiovascular disease; however, it is unclear how or which proteins encoded at this locus contribute to disease. We have previously demonstrated that loss of one candidate gene at this locus, cyclin-dependent kinase inhibitor 2B (Cdkn2b), in mice promotes vascular SMC apoptosis and aneurysm progression. Here, we investigated the role of Cdnk2b in atherogenesis and found that in a mouse model of atherosclerosis, deletion of Cdnk2b promoted advanced development of atherosclerotic plaques composed of large necrotic cores. Furthermore, human carriers of the 9p21 risk allele had reduced expression of CDKN2B in atherosclerotic plaques, which was associated with impaired expression of calreticulin, a ligand required for activation of engulfment receptors on phagocytic cells. As a result of decreased calreticulin, CDKN2B-deficient apoptotic bodies were resistant to efferocytosis and not efficiently cleared by neighboring macrophages. These uncleared SMCs elicited a series of proatherogenic juxtacrine responses associated with increased foam cell formation and inflammatory cytokine elaboration. The addition of exogenous calreticulin reversed defects associated with loss of Cdkn2b and normalized engulfment of Cdkn2b-deficient cells. Together, these data suggest that loss of CDKN2B promotes atherosclerosis by increasing the size and complexity of the lipid-laden necrotic core through impaired efferocytosis.

regulates atherosclerotic lesion size and growth of the necrotic core. 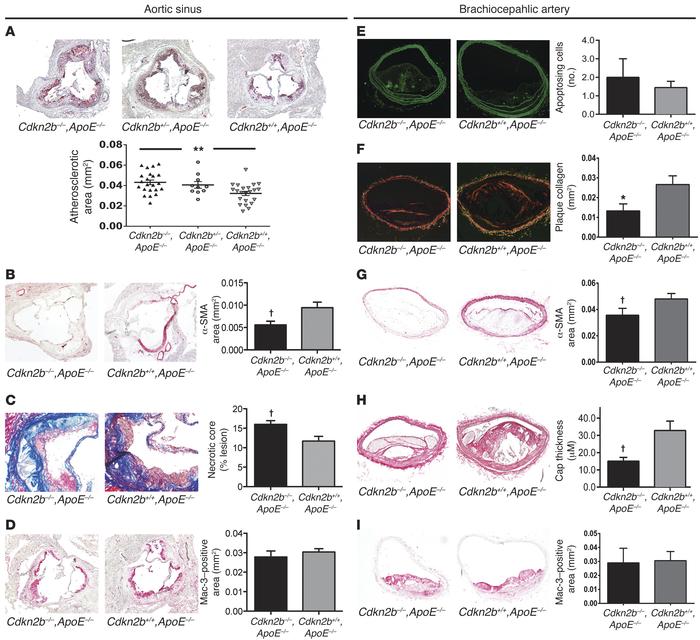 () Compared with control mice ( = 22), ( = 22) mice developed significantly larger aortic sinus atherosclerotic plaques, as assessed by the ORO-positive area. An intermediate phenotype was observed in heterozygous mice ( = 10). () These lesions displayed reduced α-SMA content and () larger necrotic cores, with () no increase in macrophage burden. () Only a trend toward a higher rate of apoptosis could be detected in animals at the terminal time point. () Brachiocephalic artery lesions in mice displayed several features of lesion vulnerability, including reduced plaque collagen content, () reduced α-SMA content and cap coverage, and () thinning of the fibrous cap overlying the necrotic core. () No difference in macrophage burden was appreciated in the brachiocephalic lesions across genotypes. Original magnification, ×4 for all aortic sinus images, ×10 for the Trichrome images in , and ×10 for all brachiocephalic images. * < 0.05; † < 0.03; ** < 0.001.