Glutamine is an abundant and versatile nutrient that participates in energy formation, redox homeostasis, macromolecular synthesis, and signaling in cancer cells. These characteristics make glutamine metabolism an appealing target for new clinical strategies to detect, monitor, and treat cancer. Here we review the metabolic functions of glutamine as a super nutrient and the surprising roles of glutamine in supporting the biological hallmarks of malignancy. We also review recent efforts in imaging and therapeutics to exploit tumor cell glutamine dependence, discuss some of the challenges in this arena, and suggest a disease-focused paradigm to deploy these emerging approaches.

Glutamine metabolism as a target for diagnostic imaging and therapy in cancer. 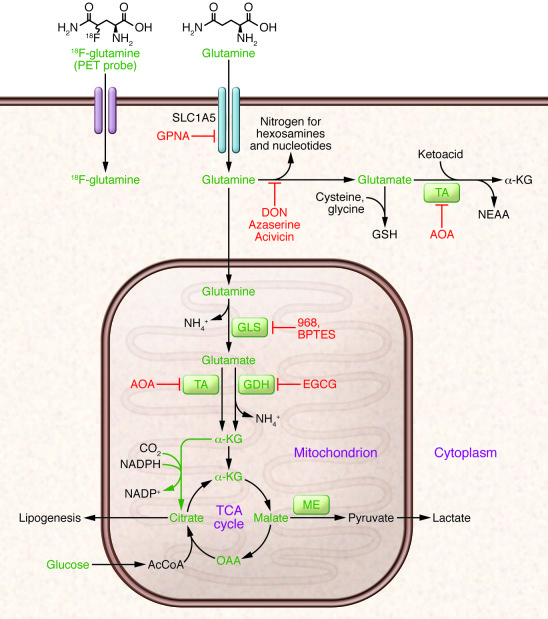 Glutamine is imported via SLC1A5 and other transporters, then enters a complex metabolic network by which its carbon and nitrogen are supplied to pathways that promote cell survival and growth. Enzymes discussed in the text are shown in green, and inhibitors that target various aspects of glutamine metabolism are shown in red. Green arrows denote reductive carboxylation. 18F-labeled analogs of glutamine are also under development as PET probes for localization of tumor tissue. AcCoA, acetyl-CoA; DON, 6-diazo-5-oxo-L-norleucine; GSH, glutathione; NEAA, nonessential amino acids; ME, malic enzyme; OAA, oxaloacetate; TA, transaminase; 968, compound 968; α-KG, α-ketoglutarate.