Emergency granulopoiesis is a component of the innate immune response that is induced in response to infectious or inflammatory challenge. It is characterized by the rapid expansion and differentiation of granulocyte/monocyte progenitor (GMP) populations, which is due in part to a shortened S-phase of the cell cycle. We found that IRF8 (also known as ICSBP), an interferon regulatory transcription factor that activates phagocyte effector genes during the innate immune response, activates the gene encoding Fanconi C () in murine myeloid progenitor cells. Moreover, IRF8-induced transcription was augmented by treatment with IL-1β, an essential cytokine for emergency granulopoiesis. The Fanconi pathway participates in repair of stalled or collapsed replication forks during DNA replication, leading us to hypothesize that the Fanconi pathway contributes to genomic stability during emergency granulopoiesis. In support of this hypothesis, mice developed anemia and neutropenia during repeated, failed episodes of emergency granulopoiesis. Failed emergency granulopoiesis in mice was associated with excess apoptosis of HSCs and progenitor cells in the bone marrow and impaired HSC function. These studies have implications for understanding the pathogenesis of bone marrow failure in Fanconi anemia and suggest possible therapeutic approaches. 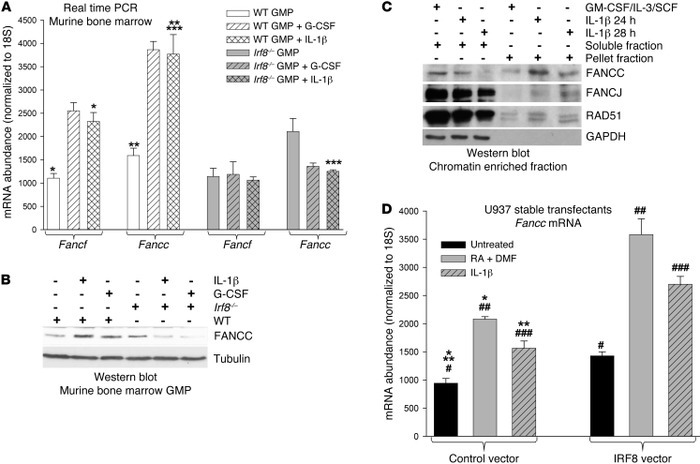