Multiple sclerosis (MS) is a genetically mediated autoimmune disease of the central nervous system. B cells have recently emerged as major contributors to disease pathogenesis, but the mechanisms responsible for the loss of B cell tolerance in patients with MS are largely unknown. In healthy individuals, developing autoreactive B cells are removed from the repertoire at 2 tolerance checkpoints during early B cell development. Both of these central and peripheral B cell tolerance checkpoints are defective in patients with rheumatoid arthritis (RA) and type 1 diabetes (T1D). Here, we found that only the peripheral, but not the central, B cell tolerance checkpoint is defective in patients with MS. We show that this specific defect is accompanied by increased activation and homeostatic proliferation of mature naive B cells. Interestingly, all of these MS features parallel defects observed in FOXP3-deficient IPEX patients, who harbor nonfunctional Tregs. We demonstrate that in contrast to patients with RA or T1D, bone marrow central B cell selection in MS appears normal in most patients. In contrast, patients with MS suffer from a specific peripheral B cell tolerance defect that is potentially attributable to impaired Treg function and that leads to the accumulation of autoreactive B cell clones in their blood.

Central B cell tolerance is functional in most MS patients. 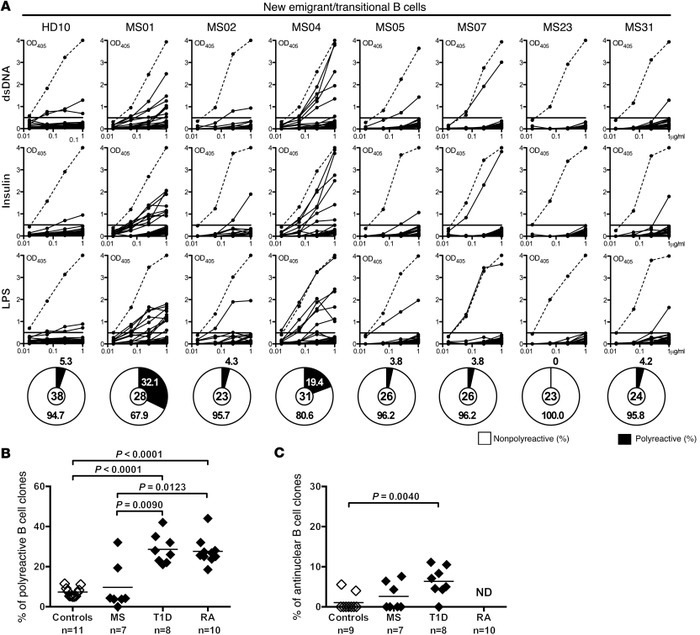 () Antibodies from new emigrant/transitional B cells from a healthy donor and MS patients were tested by ELISA for reactivity against dsDNA, insulin, and LPS. Dotted lines show the ED38-positive control, and solid lines show binding for each cloned recombinant antibody. Horizontal lines define the cutoff OD405nm for positive reactivity. Frequency of polyreactive (filled area) clones is summarized in the pie charts, with the total number of clones tested indicated in the centers. Frequencies of polyreactive () and antinuclear () new emigrant/transitional B cells in MS patients are similar to those in healthy controls and differ from those in T1D and RA patients. Statistical differences are indicated when significant.