Autologous hematopoietic stem cell gene therapy is an approach to treating sickle cell disease (SCD) patients that may result in lower morbidity than allogeneic transplantation. We examined the potential of a lentiviral vector (LV) (CCL-βAS3-FB) encoding a human hemoglobin () gene engineered to impede sickle hemoglobin polymerization () to transduce human BM CD34+ cells from SCD donors and prevent sickling of red blood cells produced by in vitro differentiation. The CCL-βAS3-FB LV transduced BM CD34+ cells from either healthy or SCD donors at similar levels, based on quantitative PCR and colony-forming unit progenitor analysis. Consistent expression of mRNA and HbAS3 protein compromised a fourth of the total β-globin–like transcripts and hemoglobin (Hb) tetramers. Upon deoxygenation, a lower percentage of -transduced red blood cells exhibited sickling compared with mock-transduced cells from sickle donors. Transduced BM CD34+ cells were transplanted into immunodeficient mice, and the human cells recovered after 2–3 months were cultured for erythroid differentiation, which showed levels of mRNA similar to those seen in the CD34+ cells that were directly differentiated in vitro. These results demonstrate that the CCL-βAS3-FB LV is capable of efficient transfer and consistent expression of an effective anti-sickling β-globin gene in human SCD BM CD34+ progenitor cells, improving physiologic parameters of the resulting red blood cells. 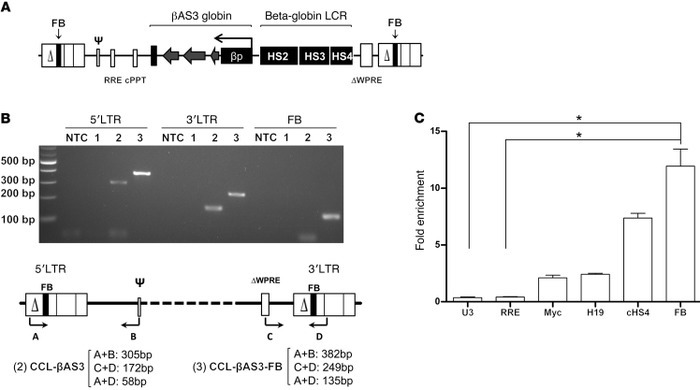 () The CCL-βAS3-FB LV provirus has the expression cassette with the human β-globin gene exons (arrowheads) with the 3 substitutions to encode the HbAS3 protein, introns, the 3′ and 5′ flanking regions, and the β-globin mini-locus control region (LCR) with hypersensitive sites 2–4. The 3′ LTR contains the SIN deletion and FB insulator, both transferred during RT to the 5′ LTR of the proviral DNA. () To test FB insulator stability, PCR reactions were performed using DNA from cells collected at day 14 of in vitro culture of BM CD34+ cells: mock transduced (lane 1), transduced with the CCL-βAS3 LV (lane 2), and transduced with the CCL-βAS3-FB LV (lane 3). Primers amplified either the 5′ LTR (A to B) or the 3′ LTR (C to D) or the FB insertion sites in both LTRs (A to D) of the provirus. The expected sizes of the PCR products with these primer pairs are indicated for the CCL-βAS3 LV and the CCL-βAS3-FB LV. NTC, no template control. () CTCF-binding protein ChIP. Chromatin was isolated from K562 cells transduced with the CCL-βAS3-FB LV (FB), the CCL-βAS3-1.2 kb cHS4 LV (cHS4), or the CCL-βAS3 vector lacking the insulator (U3). qPCR amplification was done using primers to the HIV SIN LTR (U3, cHS4, and FB) and to the HIV RRE region of the vector backbone (RRE) as negative control or the cellular c-Myc and H19/ICR sites, known to bind CTCF. * = 0.006. Values shown are mean ± SD.