Hereditary deafness affects approximately 1 in 2,000 children. Mutations in the gene encoding the cochlear gap junction protein connexin 26 (CX26) cause prelingual, nonsyndromic deafness and are responsible for as many as 50% of hereditary deafness cases in certain populations. Connexin-associated deafness is thought to be the result of defective development of auditory sensory epithelium due to connexion dysfunction. Surprisingly, CX26 deficiency is not compensated for by the closely related connexin CX30, which is abundantly expressed in the same cochlear cells. Here, using two mouse models of CX26-associated deafness, we demonstrate that disruption of the CX26-dependent gap junction plaque (GJP) is the earliest observable change during embryonic development of mice with connexin-associated deafness. Loss of CX26 resulted in a drastic reduction in the GJP area and protein level and was associated with excessive endocytosis with increased expression of caveolin 1 and caveolin 2. Furthermore, expression of deafness-associated and in cell culture resulted in visible disruption of GJPs and loss of function. Our results demonstrate that deafness-associated mutations in induce the macromolecular degradation of large gap junction complexes accompanied by an increase in caveolar structures. 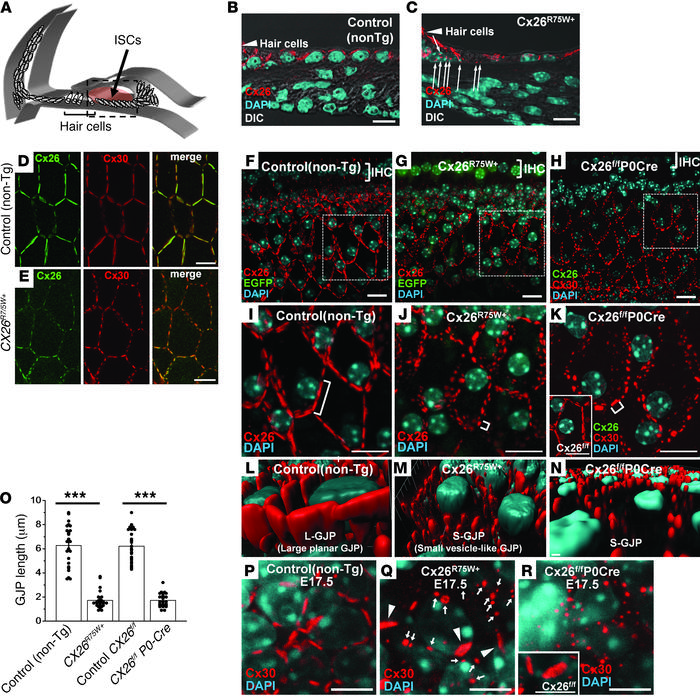 () Schematic illustration of cochlear ISCs. ( and ) CX26 distribution (in red) in ISCs (boxed region in ) in P12 cochlear cryosections from mice show fragmented GJPs (, small arrows) in contrast to GJPs in control mice (). ( and ) Double staining of CX26 and CX30 in whole-mount cochlear tissue at 3 weeks showing that these GJPs are composed of both connexins in control () and () mice. (–) GJP formation in 8-week-old adult cochleae from a mouse (), a non-Tg littermate control (), and a mouse (). The partial EGFP signals in indicate that it is a transgenic animal. (–) Image of each boxed region in –, respectively. Inset in shows the GJPs in a littermate control mouse. (–) Three-dimensional images reconstructed from the images in –, respectively. () Lengths of the largest GJPs (brackets in –) along a single cell border (mean ± SE, = 25 for all four groups). *** = 4.7 × 10–14 and 1.2 × 10–16 for and cochleae, respectively, relative to controls (Student’s test). (–) At E17.5, ISCs showed a number of S-GJPs (, arrows), including some L-GJPs (, arrowheads), as observed in the non-Tg control ISCs (). ISCs () showed totally disrupted GJPs, although the control ISCs (, inset in ) showed L-GJPs. Nuclei were counterstained with DAPI (blue). Scale bars: 10 μm.