Fusion genes are chromosomal aberrations that are found in many cancers and can be used as prognostic markers and drug targets in clinical practice. Fusions can lead to production of oncogenic fusion proteins or to enhanced expression of oncogenes. Several recent studies have reported that some fusion genes can escape microRNA regulation via 3′–untranslated region (3′-UTR) deletion. We performed whole transcriptome sequencing to identify fusion genes in glioma and discovered fusions in 4 of 48 glioblastoma samples from patients both of mixed European and of Asian descent, but not in any of 43 low-grade glioma samples tested. The fusion, caused by tandem duplication on 4p16.3, led to the loss of the 3′-UTR of , blocking gene regulation of miR-99a and enhancing expression of the fusion gene. The fusion gene was mutually exclusive with , , or amplification. Using cultured glioblastoma cells and a mouse xenograft model, we found that fusion protein expression promoted cell proliferation and tumor progression, while WT FGFR3 protein was not tumorigenic, even under forced overexpression. These results demonstrated that the gene fusion is expressed in human cancer and generates an oncogenic protein that promotes tumorigenesis in glioblastoma.

Loss of miR-99a binding site in the fusion transcript leads to increased levels of FGFR3 protein. 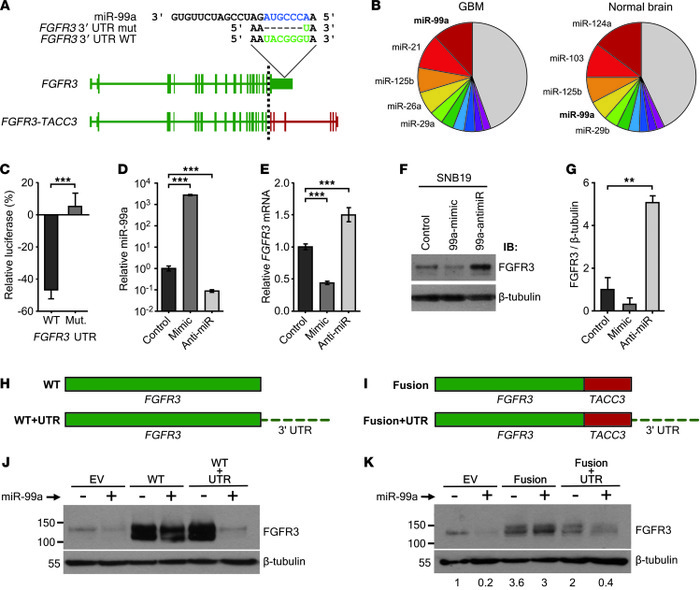