Analysis of the rescue of male fertility phenotype in male mice after osteocalcin injections. 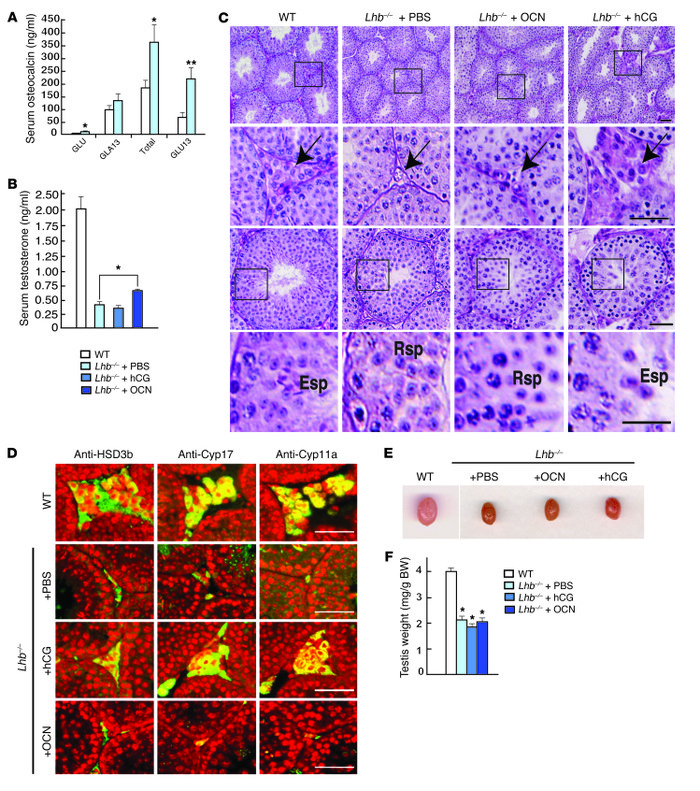 () Measurement of the uncarboxylated (GLU-OCN), carboxylated (GLA13-OCN), total (total-OCN), and undercarboxylated (GLU13-OCN) forms of osteocalcin in the serum of 10-week-old -deficient mice () ( = 7) versus WT ( = 5). () Circulating testosterone levels in 12-week-old WT ( = 5) and ( = 7) mice and in mice injected for 1 month with PBS ( = 8) or osteocalcin (3 ng/ml) ( = 5). ( and ) Testes cross-sections of WT and injected for 1 month with PBS, osteocalcin (3 ng/g/d) or hCG (5 UI twice a week). () Histological demonstration of the interstitial tissue hypoplasia (2 first rows) and of the absence of spermatogenesis (2 last rows) observed in mice. While injections of hCG rescue the phenotype, PBS or osteocalcin do not. The black line delimits the frame zoom shown in the second row. The head arrows point to the interstitial tissue containing Leydig cells. Rsp, round spermatids; Esp, elongated spermatids. () Immunofluorescence, using anti-Cyp17, anti-3β-HSD, or anti-Cyp11a antibodies as markers of mature Leydig cells. () Testis size and () testis weight normalized to BW (mg/g of BW) in mice injected with PBS ( = 8), osteocalcin ( = 4), or hCG ( = 3) compared with WT mice. All analyses were performed on nonbreeder C57BL/6J mice. Scale bar: 100 μm. * < 0.05; ** < 0.01.