One third of the world’s population is infected with (). Although most infected people remain asymptomatic, they have a 10% lifetime risk of developing active tuberculosis (TB). Thus, the current challenge is to identify immune parameters that distinguish individuals with latent TB from those with active TB. Using human and experimental models of infection, we demonstrated that organized ectopic lymphoid structures containing CXCR5+ T cells were present in -infected lungs. In addition, we found that in experimental infection models, the presence of CXCR5+ T cells within ectopic lymphoid structures was associated with immune control. Furthermore, in a mouse model of infection, we showed that activated CD4+CXCR5+ T cells accumulated in -infected lungs and produced proinflammatory cytokines. Mice deficient in had increased susceptibility to TB due to defective T cell localization within the lung parenchyma. We demonstrated that CXCR5 expression in T cells mediated correct T cell localization within TB granulomas, promoted efficient macrophage activation, protected against infection, and facilitated lymphoid follicle formation. These data demonstrate that CD4+CXCR5+ T cells play a protective role in the immune response against TB and highlight their potential use for future TB vaccine design and therapy.

CXCR5 expression is required for protective immunity against infection. 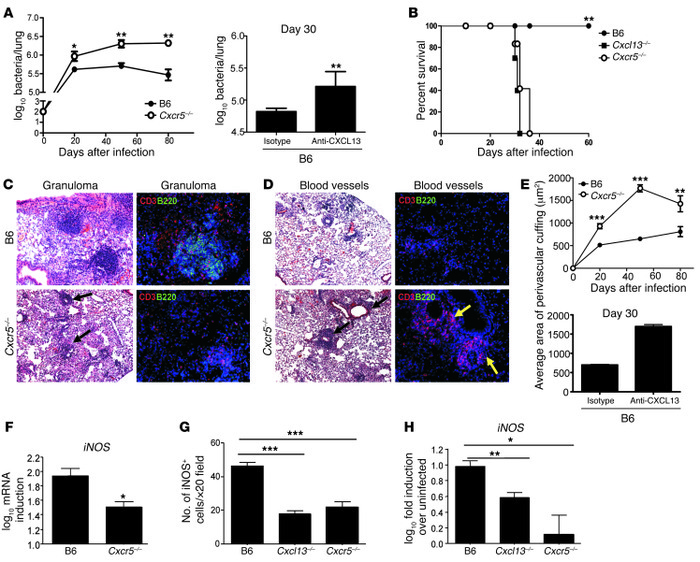 () B6 and mice were infected as in Figure or B6 -infected mice received CXCL13 neutralizing antibodies, and lung bacterial burden was determined. () Survival of B6, , and mice with a high dose (1,000 CFU) of aerosolized infection was determined. On day 50 after infection, FFPE lung sections were H&E stained or analyzed by immunofluorescence for CD3, B220 ( and ). Representative pictures of granulomas () and perivascular T cell cuffing () are shown. Black and yellow arrows indicate T cell perivascular cuffing ( and ). () Average area of perivascular cuffs was quantified using the morphometric tool of the Zeiss Axioplan microscope. Error bars are not visible in the day 30 B6 isotype group (). Original magnification, ×100 (H&E images); ×200 (fluorescent images). () log10 fold induction of mRNA in B6 and -infected lungs relative to levels in uninfected lungs was determined by RT-PCR on day 21 after infection. FFPE lung sections from day 21 -infected B6, , and mice were analyzed by immunofluorescence for the number of iNOS+ cells per granuloma (). On day 21 after infection, lung CD11c+ cells were isolated from uninfected or -infected B6, , and mice. () mRNA expression in CD11c+ cells isolated from infected mice over levels detected in uninfected controls was determined by RT-PCR. The data points represent the mean (±SD) of values from 4–6 mice. (–). * = 0.05, ** = 0.005, *** = 0.0005. One experiment representative of 2 is shown.