Increased brain uptake and oxidation of acetate in heavy drinkers

Increased brain uptake and oxidation of acetate in heavy drinkers

When a person consumes ethanol, the body quickly begins to convert it to acetic acid, which circulates in the blood and can serve as a source of energy for the brain and other organs. This study used 13C magnetic resonance spectroscopy to test whether chronic heavy drinking is associated with greater brain uptake and oxidation of acetic acid, providing a potential metabolic reward or adenosinergic effect as a consequence of drinking. Seven heavy drinkers, who regularly consumed at least 8 drinks per week and at least 4 drinks per day at least once per week, and 7 light drinkers, who consumed fewer than 2 drinks per week were recruited. The subjects were administered [2-13C]acetate for 2 hours and scanned throughout that time with magnetic resonance spectroscopy of the brain to observe natural 13C abundance of N-acetylaspartate (NAA) and the appearance of 13C-labeled glutamate, glutamine, and acetate. Heavy drinkers had approximately 2-fold more brain acetate relative to blood and twice as much labeled glutamate and glutamine. The results show that acetate transport and oxidation are faster in heavy drinkers compared with that in light drinkers. Our finding suggests that a new therapeutic approach to supply acetate during alcohol detoxification may be beneficial. 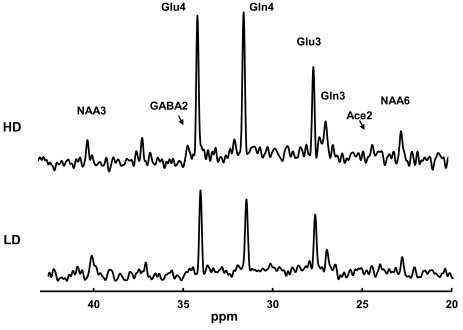 The heavy drinker had markedly greater 13C labeling than the light drinker. Acquisition parameters were as follows: 765 complex points; 5,000 Hz bandwidth; repetition time, 2.5 seconds. A total of 640 acquisitions were grouped to make each spectrum, each representing the final 27 minutes observed while the glutamate and glutamine C4 labeling were at a steady state. The spectra were zero filled to 16,384 complex points, windowed with –2 Hz Lorentzian and 6 Hz Gaussian broadening, and Fourier transformed.